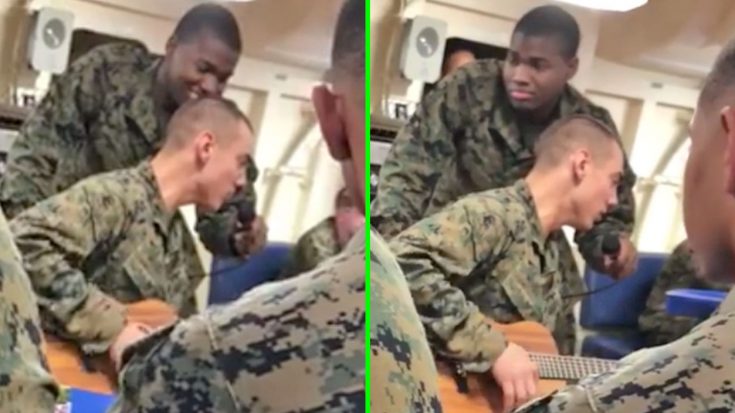 One group of marines were treated to a private concert recently when their fellow marine brother performed a few tunes for them during their downtime.

Evan Moore picked up his guitar and a friend held up a microphone to his mouth so he could perform the Randy Travis classic “Three Wooden Crosses” for his fellow servicemen during an impromptu concert.

Travis released “Three Wooden Crosses” as a single off his 2002 album Rise and Shine. It quickly became his 16th career number-one single, and his first since 1994’s “Whisper My Name.” It was written by Kym Williams and Doug Johnson and won the CMA and ACM Awards for Song of the Year, as well as the Dove Award for Country Song of the Year.

The song follows four passengers – “a farmer and a teacher, a hooker and a preacher” – on a midnight bus traveling to Mexico. Their bus is involved in a fatal accident, which kills three of the four passengers. As the song goes on, we find out that that farmer, teacher, and preacher all passed away – representing the three wooden crosses.

At the very end, we find out that the storyteller is the son of the hooker, who lived, and he is now a preacher, telling this story to his congregation.

Moore’s Take On A Classic

This marine’s voice was perfectly suited for the Travis classic, seeing as his natural baritone voice could fill out those hard to reach low notes Travis is notorious for.

After singing his final note, the many marines watching him erupted into applause and cheer, one even yelling out a supportive, “Hell yeah, boy!” Moore celebrated his successful performance by putting his fist in the air.

This video was posted to Moore’s personal Facebook page, and we sure hope Travis himself comes across it! He is known for reaching out to artists who cover his songs, like American Idol star Maddie Poppe.

Congratulations @MaddiePoppe on winning @AmericanIdol ! such a fan of this rendition of #IToldYouSo https://t.co/eNesWk8977

Watch Moore’s take on “Three Wooden Crosses” in the video below!

Might as well throw this one out too ? don’t judge my shaved head!