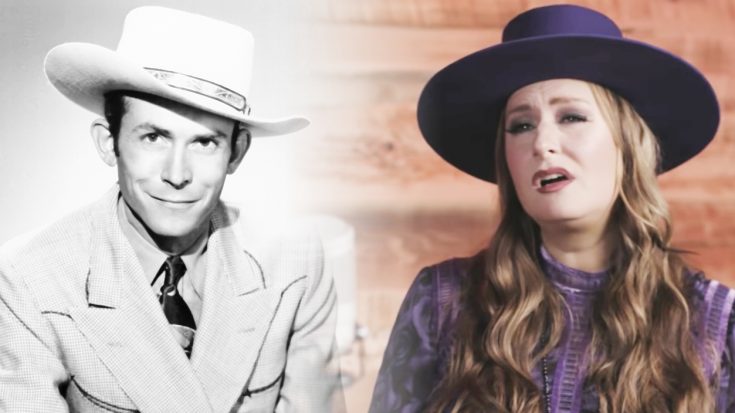 During an intimate performance at Country Rebel, country royalty paid tribute to her roots with a “Radio Replay” of Hank Williams’ hymn “A House of Gold.”

Hank Jr.’s daughters Holly and Hilary have both started their own music careers and they both inherited the family music gene! What is even better is that while they both are creating original music, they have not forgotten where they come from and often honor their grandfather and father with beautifully crafted covers.

While sitting in for an acoustic session at Country Rebel, Hilary decided to take a seat and sing one of her grandpa’s gospel tunes, “A House Of Gold.”

The song is a life lesson in itself. Written by Hank Sr. himself, it was first recorded around 1949 but wasn’t formally released until 1954 on the B-side of How Can You Refuse Him Now? The song explained that while there are many material distractions on this earth, we need to remember what is truly important in this life.

The lyrics combine the haunting realization that wealth can doom us with the appreciation for the ability to be saved. The chorus amplifies this sentiment saying, “I’d rather be in a deep, dark grave/ And know that my poor soul was saved/ Than to live in this world in a house of gold.”

In his recording of “A House Of Gold,” Hank Sr. offered his twangy, howling vocals to the song. Just one listen, and we are brought back to the early days of country music.

Any other artist covering this song might not have been up to the challenge – but Hilary stepped up and offered a spine-tingling rendition of the classic country hymn. As she began singing, she swayed back and forth obviously feeling the music throughout her body. Watching her pour her heart and soul into the song as she flawlessly hit every note will move you in a way you wouldn’t think was possible.

Her grandpa would be proud that his legacy is living on in the country music world – and that his granddaughters are recreating some of his most beautiful songs in such creative ways.

You can watch the full video of Hilary’s tribute to Hank Sr. below and be sure to check out her album My Lucky Scars now available on Spotify.