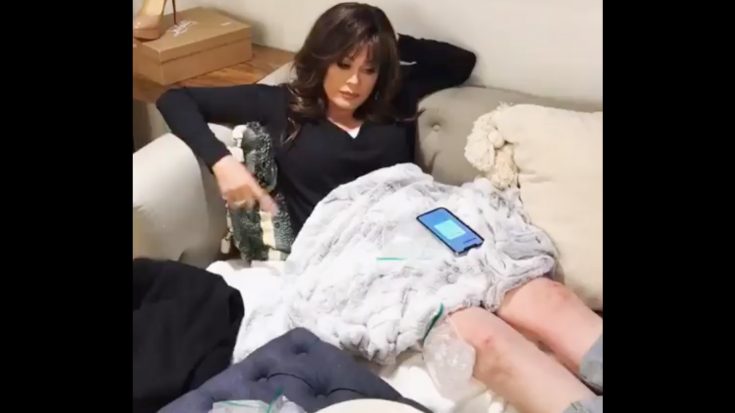 In the final weeks of their time at The Flamingo Hotel in Las Vegas, the famous brother-sister-duo of Donny & Marie are giving each and every performance 110%. But it seems that maybe Marie got a little too excited during the most recent show – and ended up with a knee injury.

I can’t believe it — Donny & I will be honored by the @lasvegaswalkofstars!! 🌟🌟🌟 The ceremony is set for Friday, October 4th. I have both lived and worked in Las Vegas for over 10 years @flamingovegas and consider it my home. Nothing makes me happier than to celebrate this city that means so much to my family. Thank you to the Las Vegas Walk of Stars and all of our fans who have made this possible. I love you so much!!! 💋 #walkofstars

Marie Osmond, who has been performing with her brother for decades, took to Instagram and showcased a pair of badly-bruised and swollen knees as she laughed about the injury.

“The show must go on!” she wrote in the caption.

Apparently, the injury happened right in the opening number – and she had to dance all night like that until she could finally lay down, elevate her legs, and ice the injury.

A fan who was in the audience commented on the post, “Omg! Saw that happen last night and was worried about how it would feel today! You carried on like a pro!”

When another asked what exactly happened, user @kaball226 explained what caused the injuries.

“[she was] dancing in the opening song in super high boots and just lost her footing. Bless her heart, it looked like it hurt big time and she had awesome backup people that swooped in to help her. She came back like a trooper but that buff on her knees was a visible owie for the night.”

Osmond, who is prepping for her first episode as a new host on daytime talk show The Talk, didn’t let the battered knees get in the way of her making it to Los Angeles in time for the first episode!

The countdown is on!! The new season of #TheTalk starts Sept. 9th on CBS. Who’s excited?? 💋

“Look at my knees,” she said in the video post. “I actually did this at the Flamingo dancing with Donny last night, but I’m going to be there tonight! Yes, I am. I got to get on a plane.”

She is replacing outgoing host Sara Gilbert as one of the five hostesses on the show and will join Carrie Ann Inaba, Sharon Osbourne, Sheryl Underwood, and Eve starting this coming Monday, September 9th.

Watch her full Instagram post below along with special coverage about her and Donny ending their long-running Vegas show.

The show must go on 🤣