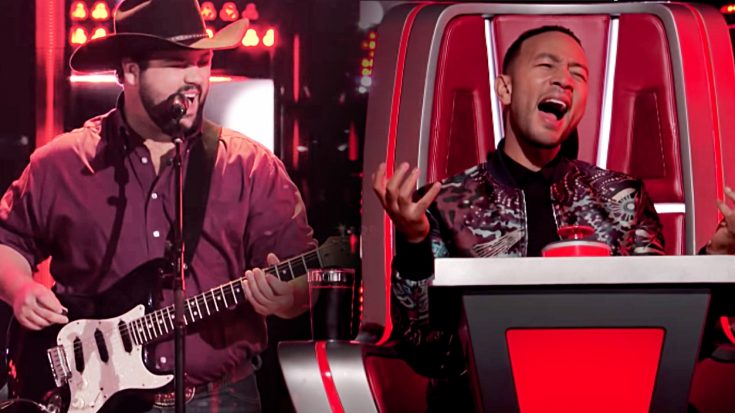 Taking on one of the biggest country-rock crossover hits in history, this cowboy set fire to NBC’s hit singing competition in a blind audition that rivals most we’ve seen this year – but only one coach chose to turn around for him.

Y’all be sure to check out this weeks episodes of @nbcthevoice, on Monday and Tuesday evening! #thevoice

The Voice has been known for its unique format for singing competitions, rotating coaches, and extremely varied singing styles brought by the performers. You name it, The Voice has seen it.

But, one of the fan’s favorite styles to watch is country music, so this new singer’s audition really struck a chord in many of the folks who tune in each week.

1st pic: Andrew- Hey @treyrosemusic , are you ready to jam at Thirsty Armadillo tonight at the Fort Worth Stockyards?! 2nd pic: Trey- You damn right I’m ready! Party starts at 7! 3rd pic: Everything you need to know about this epic night tonight! ??yall come party with us!

20-year-old Andrew Sevener has clearly been wailing on that guitar for quite some time now and he sure sounds like he’s been singing for decades.

Crushing The Rolling Stones’ 1969 super-hit “Honky Tonk Women,” Sevener lit the house on fire with the raucous and rowdy performance that had every single coach jamming alongside him…but he only earned one of their votes.

Even though this sizzling performance got John Legend singing along and he said that the whole thing “electrified the room” – nobody turned for young Andrew Sevener except for Blake Shelton…and we know why.

Shelton who was howling about how great Sevener was, called out all the other coaches for not turning around, but when Kelly Clarkson started speaking, she told him the reason she didn’t turn around – and the reason is similar for others.

“I’ll tell you right now why I didn’t turn around – I’m tired of country artists just laughing in my face and choosin’ Blake. You sang your tail off – but from your first three notes I was like ‘not gonna do it’.”

So, for one of the best country performances to get just a one-chair turn, that means the artist got less choice when it comes to whose team they want to be on, and eliminates their option to pick from a panel of coaches.

The coaches don’t get a limited number of button-presses, so why not turn if someone is that good?!

Watch the full performance below and let us know if you think it’s fair for them not to turn around for him.