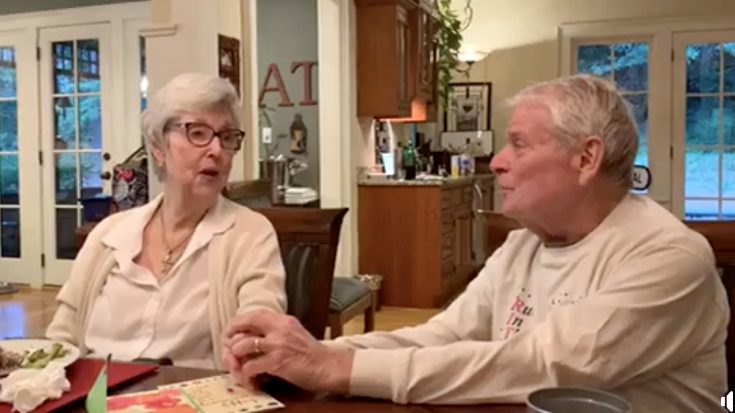 In June of this year, 87-year old Joe Korst suffered his first stroke. Another stroke followed a month later causing Mr. Korst to lose most of his ability to speak and his memory. But, that didn’t stop him from carrying out his anniversary tradition with him wife of 63 years.

At the suggestion of his daughter, Theresa Kostrzewa, and with the help of his speech therapist, Mr. Korst relearned the words and tune to Kenny Rogers’ song “All That You Could Be.” The North Carolina man began the tradition of singing the song to his wife on their 50th wedding anniversary, and this year was going to be no exception.

Kostrzewa captured the precious moment on camera and shared it to the WakeMed Health and Hospitals page where her father was a patient. The brief clip shows Joe and his wife, Sharon, sitting at a table holding hands and singing the familiar lyrics together. As the song concludes, Joe kisses Sharon’s hand then the pair share a sweet kiss.

Kostrzewa told the TODAY Show that after her father’s first stroke, he was only able to say the phrases, “I love you,” and “I’m sorry.” While he didn’t learn all of the song, “he got the most important part,” she said.

Joe met Sharon when he was 22 and she was just a teenager, and they married two years later. Kostrzewa

“He tells people, ‘I’m 63 years in love,'” Kostrzewa said. “He just has always unfailingly loved my mom and lets everybody know it and everybody see it. My mom knows she’s been blessed to have Joe Korst love her her entire life.”

Watch Joe and Sharon Korst’s sing Kenny Rogers’ “All That You Could Be” in the video below.

Joe and Sharon celebrated their 63rd wedding anniversary this past week..After recently having two strokes, Joe, one of our WakeMed rehab patients, was unable to remember the words to their song: “All That You Could Be” by Kenny Rogers..Joe has been practicing this song in speech therapy so that he could surprise his wife by singing it to her on their anniversary..Happy Anniversary, Joe and Sharon!.#wakemed #stroke #strokesurvivor #kennyrogers #anniversary #wakecountync #raleighnc ABC11 WTVD WRAL TV

Hear Kenny Rogers’ rendition of “All That You Could Be” below.