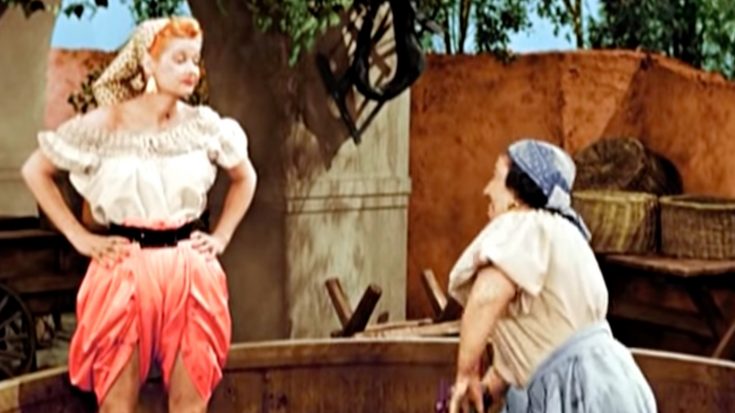 I Love Lucy fans will most-likely remember the famed 1956 episode, “Lucy’s Italian Movie,” in which Ball is hoping to get cast in a film about Italian winemaking and ends up in a comedic situation surrounded by squished grapes.

Ball visits a vineyard to learn the tricks of the trade. In the midst of learning how to stomp grapes, she gets into a fight with her on-screen grape-stomping adversary, played by Teresa Tirelli.

But, there was one major problem…

The problem? According to a report on this famous scene by The International Wine & Food Society, Tirelli didn’t speak much English and had never acted before…so, when it came time for their staged fight – she didn’t understand that the fight was supposed to be fake!

“Since we hadn’t worked with the grapes in the vat during rehearsals, I had no idea what I was in store for. Once the fight started, the lady was bent on drowning me. At one point, she literally held my head underwater, and I had to fight to get my breath back. A lot of that was edited out of the final print. Looking back, of course, I’m glad it happened that way because the scene was so good.”

A post shared by I Love Lucy ❤️ (@lucyrickyethelfred)

Furthermore, Ball accidentally hit Tirelli during one take, and she responded back with force.

“Down I went, with Teresa on top of me … She just held me down, hitting me.  I thought she was trying to kill me.  I had grapes up my nose, up my ears.”

Luckily, Ball made it through the scene, and the cast and crew enjoyed taking home copious amounts of unused grapes left over after filming.

See the full scene below!