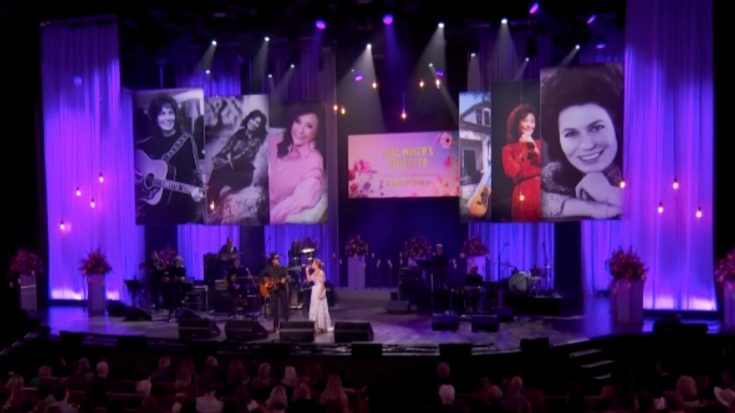 On Sunday (October 30) country artists gathered at the Grand Ole Opry house to honor Loretta Lynn during a public memorial service/celebration of life. Loretta, who passed away on October 4, was recognized with a number of tribute performances from artists such as Alan Jackson, George Strait, and Tanya Tucker.

Another emotional performance was delivered by Loretta’s granddaughter, Emmy Russell, and Willie Nelson‘s son, Lukas Nelson. The pair sang Loretta and Willie’s 2016 duet, “Lay Me Down.”

Loretta’s family released a statement following the service to thank everyone who participated:

“Our hearts are so deeply touched by the beautiful tribute held Sunday night at the @opry to honor Loretta’s life and legacy. The night perfectly captured her career and the performances were phenomenal. Above all each song came from true friends, and the room was filled with her family, her friends, and her fans. Love filled the room and surrounded each of us.”

The service was originally broadcast live on CMT. The Lynn family said it will re-air twice on CMT in the coming days so those who missed it can tune in.

If you won’t be able to watch the service on TV, CMT shared videos of many performances on YouTube and social media. Watch one of those performances below.

It warms our hearts to see so many people honoring Loretta and her music. She will never be forgotten.