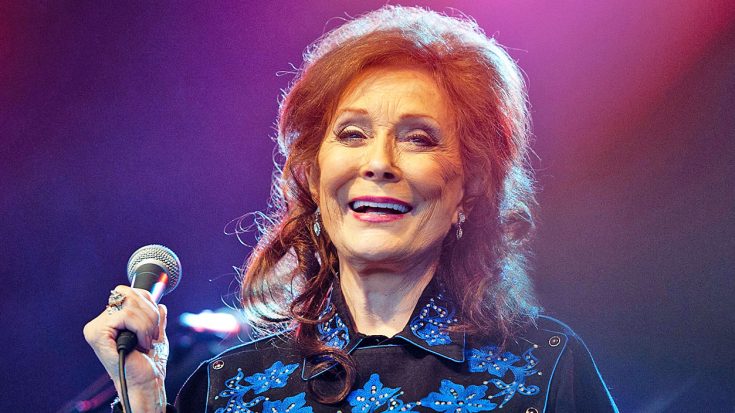 Earlier this month, we learned that country music icon Loretta Lynn broke her hip after suffering a fall at her Tennessee home on New Year’s Day. Her daughter, Patsy Lynn Russell, spoke to People about the fall, saying that her mom was “in great spirits” despite everything that happened.

Patsy also shared some exciting news for her mother’s fans, saying that she is working on completing a new album. “That’s what she’s been focusing on,” Patsy said. “She’s nonstop but she’s always been that way — it’s what keeps her going.”

In early 2017, Loretta announced her intentions to release a brand-new album, Wouldn’t It Be Great. The album was supposed to debut in August, but those plans were unfortunately placed on hold after Loretta suffered a stroke in May.

After months of recovery, Patsy said that Loretta was finally back in the studio working on her new album. Based on a recent message Loretta shared on social media, that album or a future one could possibly contain a new duet.

Loretta passed her musical talents on to her children and grandchildren, and many of them are involved in the music industry in some capacity. Her grandson, David Russell, is who she calls the “rocker of the family,” and recently released his debut song, “Jack & Sally.”

Being a proud grandma, Loretta took to social media to gush about the success David has been experiencing with the song. In a post she shared on Tuesday (January 16), Loretta said that David had managed to chart “Jack & Sally” on SoundCloud.

In the same post, Loretta also revealed that she plans to record a duet with David in the spring. We hope that pans out, because that would be wonderful to hear!

Congrats to my grandson David Russell for charting on SoundCloud with his debut song, "Jack & Sally". He is my rocker of the family and I plan to record a song with him in the spring. My little Jack White!

If you’d like to get an idea of what David’s voice will sound like in a duet with his grandma, you can listen to his debut song “Jack & Sally” below. Loretta has every reason to be proud of him, he has some true talent!