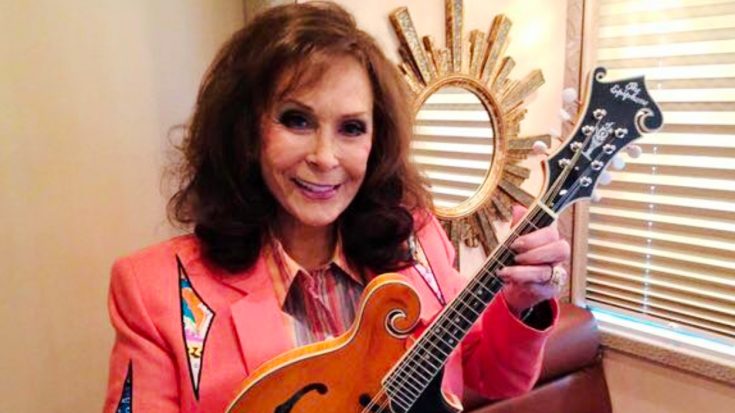 Ever since country legend 87-year-old Loretta Lynn suffered a stroke in May 2017, she has cut way back on her public appearances. She made her first appearance on October 2, 2017 to sing a few songs at a Tennessee Motorcycles and Music Revival event hosted at her famous ranch.

Just a couple weeks later, she surprised everyone when she showed up to say a speech about Alan Jackson as he was being inducted into the Country Music Hall of Fame.

Since then her public appearances have been few and far between, one reason being because months after her stroke, she suffered a broken hip. But she recently made a rare appearance in Tennessee – and she looked fantastic.

Newest Country Music Hall of Fame inductee Ray Stevens announced on his official Facebook page that on Friday night (July 5), Lynn had stopped by his CabaRay Showroom to watch him perform. Lynn and her four family members got the VIP treatment in the Owen Bradley booth, and she posed for a photo with the “Everything is Beautiful” singer.

Stevens wanted to give Lynn a shout-out, so during the show he let the crowd know there was a legend in their presence.

He said, “I have a great friend in the audience tonight and I want to introduce her. You know, I’ve known her for so many years and I’ve been a big fan and she’s had so many hit records. There’s the queen of country music and the first lady of country music, but ladies and gentlemen, there’s only one Coal Miner’s Daughter and she’s with us tonight – Loretta Lynn.”

Of the show, Lynn said, “It was a huge treat for me to go to Ray Stevens’ show at CabaRay this past weekend. He kept me laughing the whole time! He’s such a wonderful entertainer. I am so happy that he’ll be inducted into the Country Music Hall of Fame this year. Love you, Ray. Keep the laughs coming!”