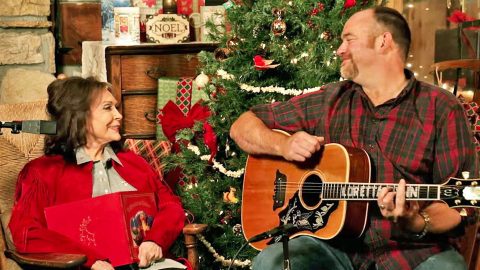 Although Loretta Lynn was in the country music business for decades, she only ever released two holiday albums. Released 50 years apart from each other, those two Christmas albums are regarded as some of the best to ever grace country music.

Lynn’s 1966 Christmas album was appropriately titled Country Christmas, and was named after one of the tracks. That track was written entirely by Lynn, and is all about the foods, decorations, and people that make a Christmas “country.”

The peppy, upbeat tune has been a fan-favorite for years, so Lynn brought it back for her second Christmas record. Titled White Christmas Blue, the album was released in 2016 and contained a mix new recordings and remakes of tracks Lynn previously sang.

Rightfully so, “Country Christmas” was one of the songs Lynn recorded again for White Christmas Blue. The new recording is just as delightful as the past one, and it comes with a video to match!

During the 2016 Christmas season, Lynn shared a few videos to celebrate the release of White Christmas Blue. One of those videos captured Lynn singing “Country Christmas” with some help from John Carter Cash on guitar.

Cash’s involvement in the video wasn’t random. As the son of Johnny and June Carter Cash, he knew Lynn for ages. They worked together many times through the years, and he co-produced White Christmas Blue with Lynn’s daughter, Patsy.

The music video Lynn and Cash filmed for “Country Christmas” is as cute as a button. Lynn, looking lovable as ever, wore a festive red jacket and clutched a Christmas book while she sat in her cozy rocking chair. Cash was seated in a chair next to her, while a Christmas tree with old-fashioned decorations served as the backdrop.

A special treat comes in the form of home videos taken from past Lynn family holidays. This footage is sprinkled throughout the video, and shows Lynn making special memories with her children and husband.

In a nutshell, Lynn’s video for “Country Christmas” is sure to brighten your day. Check it out in the video below…you’ll be glad you did.

Now that Lynn is no longer with us, we’re so glad we have songs like “Country Christmas” to remember her by during the holiday season.