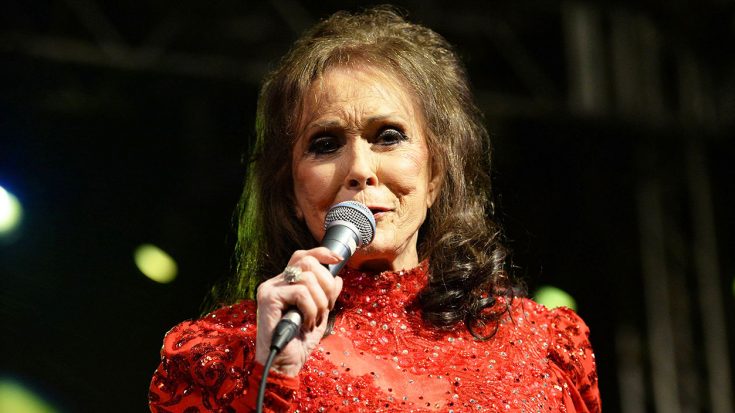 When life throws you curve balls, deal with them the Loretta way. The famous singer and songwriter, Loretta Lynn has built a 60-year-old career for herself and has no plans of slowing down; even when life comes at her fast. Lynn came forward about taking on life after suffering from a stroke and hip fracture.

Lynn, 86, suffered a stroke in May 2017 while at her home in Nashville. Thankfully, she was admitted into a hospital the same night of her stroke; leading to a quicker recovery. Just a little over a year after her stroke, Lynn came forward about her health in an interview with PEOPLE,

The three-time Grammy Award-winning singer was in the middle of her tour when her health took a plummet. Lynn had no choice but to postpone future shows but it wasn’t long before she was back on the road. Even more, the singer released her newest album Wouldn’t It Be Great this past week. The album will be home to original songs accompanied by remakes of Lynn’s old favorites.

I had so much fun writin’ and singin’ the songs on ‘Wouldn’t It Be Great’ for you, my friends. Today’s the day you can finally hear them. #WIBG

The feisty country music legend explained her initial worry when she realized the left side of her body was no longer responsive post-stroke. Her main focus being whether that would affect her golden vocals.

“I wondered if I could sing. Mommy said I was born singin’. That’s all I’ve ever done. I couldn’t believe that that could be taken away.”

#tbt to this stunning photo of Loretta by Henry Horenstein Photography

With no vocal cord left behind, Lynn started physical therapy immediately following the stroke. The outcome was tremendous as she began being able to use her left hand and arm soon thereafter. Lynn gives all the credit to her positive mindset that got her through this difficult time.

The following New Year’s Day (2018), Lynn suffered yet another health setback. The singer fell in her home, breaking her hip. Still, giving up was not a part of the singer’s fate. Admitting that she is definitely slower now while she relies on a walker and occasional wheelchair, it’s just another trial she won’t let define her.

Releasing her new music has been an incredible outlet for Lynn. The title song off her album, “Would It Be Great” was written for her former husband, Doo who passed in 1996. The two were married for almost 50 years leaving Lynn with a love she’ll hold in her heart forever.

The album holds yet another love-lost melody that was co-written with her daughter, Patsy. “Ain’t No Time To Go” tells the story of not being ready for a loved one to go too soon. Lynn admitted that the inspiration behind her songwriting comes from the fact that she knows “them hurtin’ songs sell so much better.”

Watch her music video for “Ain’t No Time To Go” below!