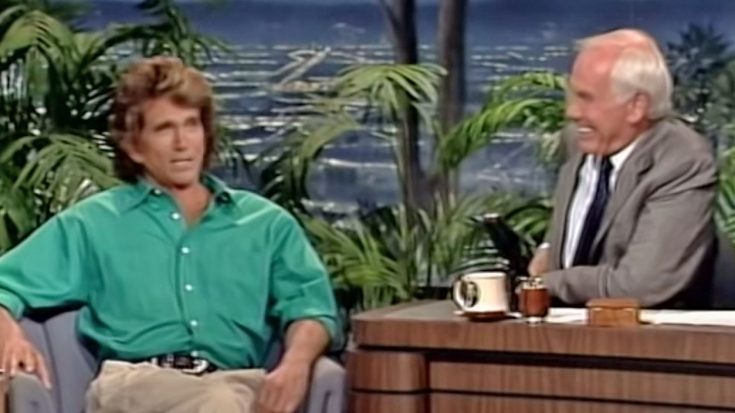 Michael Landon was one of the most beloved TV actors of all time for his role Little Joe Cartwright on the classic western show Bonanza. Following that success, he played Laura Ingalls’ father Charles Ingalls on the show Little House On The Prairie.

Michael Landon as 'Charles Ingalls' on the TV series "Little House on the Prairie" in 1974. ? pic.twitter.com/bVOEuDpwyD

Unfortunately all too soon, Landon was diagnosed with inoperable pancreatic cancer. Even with limited time left, the actor kept a positive attitude and agreed to make an appearance on The Tonight Show Starring Johnny Carson in May of 1991.

As soon as the interview starts the first thing Landon says is a joke causing the entire audience to laugh. He then hilariously goes into detail describing some of the suggestions his fans wrote him to try and potentially cure his cancer.

Carson shared one of his stories with Landon, and as it turns out he’s quite the prankster who really commits to a practical joke. He went on to describe to the audience an experience he had with Landon after leaving a Malibu restaurant together a few months prior.

“As we left that night, I was backing out of the parking lot and a cat hangs around out there. I don’t know if its a pet of the restaurant or the owner’s cat and I hear this kind of squeal, and we drove home. This man calls me the next day and says ‘You know the owner called me and you backed over his cat and killed him.'”

A month later the two of them went back to the restaurant and Landon somehow managed to have “Tureen of Tabby” written into the menu, served in motor oil. A total of three dishes were all cat-inspired and Carson immediately knew he hadn’t killed the poor cat.

Watch Carson tell the story in the video below.