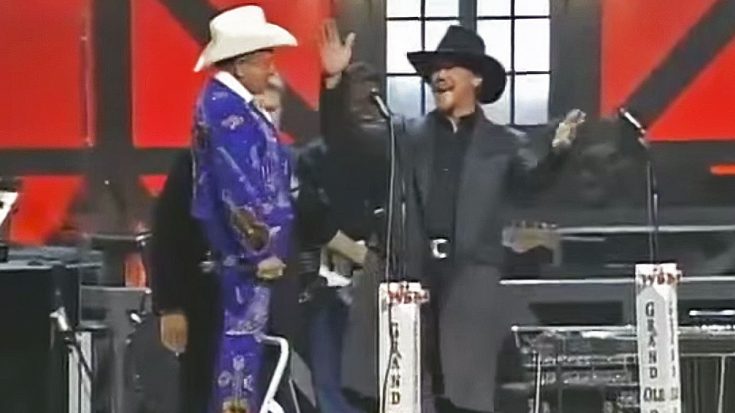 Back in 2003, the iconic country star got a huge surprise when he was asked this one question by a longstanding icon in country music – on the famous Opry stage!

Bringing out a step ladder, Little Jimmy Dickens had everything he would need in order to present this honor to country superstar Trace Adkins!

It was just supposed to be another night at the Grand Ole Opry for Trace, but to his incredible surprise, Little Jimmy Dickens walked out on the stage right in the middle of his set to ask him a life-changing question that would leave him nearly speechless!

13 Years Ago: Trace Adkins Is Inducted Into the Grand Ole Opry https://t.co/TU2qvB9bbk pic.twitter.com/0iQbj6P5vQ

“Mr. Adkins, I hope that you’ll accept my humble apology for the interruption here, I’m just following orders,” Dickens said from his ladder, now eye-to-eye with Trace. “Our manager, Mr. Pete Fisher, he asked me to come out here and ask you a very, very serious question.”

Well, Trace didn’t have much to say other than “Alright” and with that, Dickens threw out the question and it sent everyone in the audience into a fit of cheers!

“Just how bad would you like to become a member of our Grand Ole Opry family?“

Trace was beyond honored to join the legendary ranks of the Opry, and obviously accepted!

(And years later, he would get the opportunity to do the same to another country singer – Dustin Lynch.)

It was just about a month afterward, on August 23rd, 2003 that the Grand Ole Opry officially welcomed Trace Adkins as a member – and he’s surely never going to forget this amazing moment on that stage with Little Jimmy Dickens!

Watch the full video of his invitation to join the Opry below!