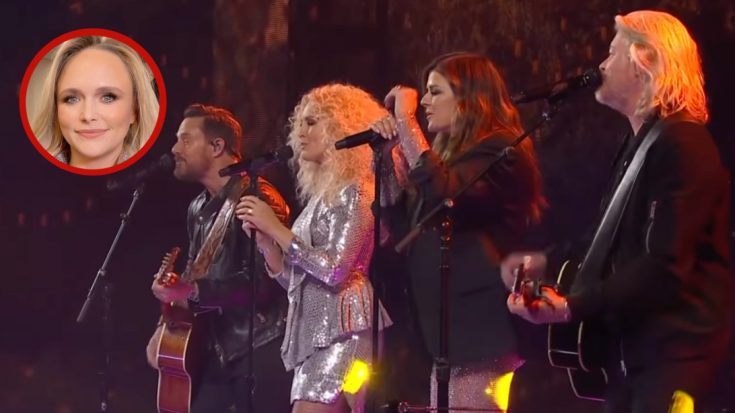 Miranda Lambert was one of several artists and songwriters honored Wednesday night at the ACM Honors in Nashville. As part of her tribute, her former tour mates Little Big Town delivered a beautiful cover of Lambert’s 2009 hit, “House That Built Me.”

The event, which took place at Nashville’s Ryman Auditorium, honored Lambert with the night’s biggest award, the ACM Triple Crown Award. This honor is reserved for those who have won Top New Artist, Female/Male Vocalist of the Year and Entertainer of the Year awards at the annual Academy of Country Music Awards. The 38-year-old is one of only seven artists to be given this trophy.

Little Big Town took the stage early in the evening for a tear-jerking cover of “House That Built Me,” a song that was Lambert’s first career No. 1 and her fastest rising single to date. The song also earned her a Grammy award in 2011 for Best Female Country Vocal Performance.

Legendary country duo Brooks & Dunn followed LBT’s performance with a cover of their own. Kix Brooks and Ronnie Dunn took the stage to deliver a fiery performance of Miranda’s “Kerosene,” the title track for Lambert’s debut album and her first Top 20 hit.

Fans will have to wait to see the full performances from Little Big Town and Brooks & Dunn until the FOX television special airs in September. But, a brief clip shared to social media gave fans a glimpse of Little Big Town’s performance as Jimi Westbrook, Karen Fairchild, Kimberly Schlapman and Philip Sweet deliver a soulful rendition that leaves us excited to hear the performance in full.

Hear Little Big Town sing “House That Built Me” in the video below.

Little Big Town honored Miranda Lambert with a performance of The House That Built Me. pic.twitter.com/nO949d1lZs