Lisa Marie Gave 1 Final Gift To Her Father: A Bracelet Secretly Hidden In His Coffin 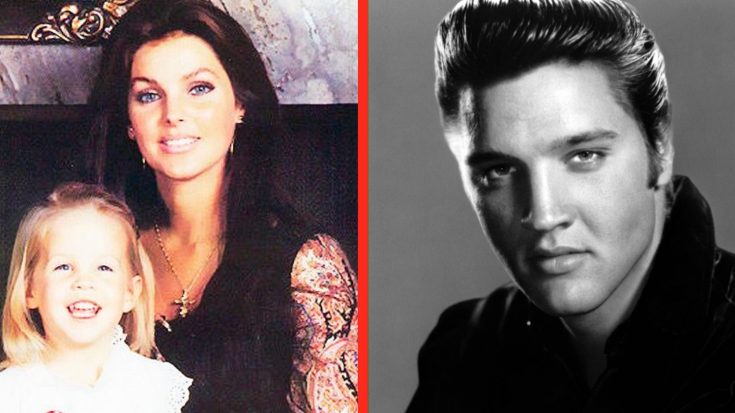 The one and only child of The King, Elvis Presley, was just nine years old when her father passed away on August 16th, 1977 at just 42 years old.

A sudden death of one of the world’s biggest superstars shocked even the smallest towns across America. Because of his status as an icon in pop culture, fans rushed to the late star’s estate for his viewing.

Vernon Presley, Elvis’ father, insisted that his son have a public viewing even though most others in his inner circle thought it unwise. Estimates from the time say that the crowd to see Elvis was more than a mile long.

November 24, 1977: Vernon Presley, Elvis Presley's father, places a rose on his son's grave, as news-people were permitted inside the grounds at Graceland in Memphis for the first time since Elvis' funeral. pic.twitter.com/9e1VYxdMaa

The funeral director overseeing Elvis’ arrangements, Robert Kendall, said that when Lisa Marie approached the casket she asked him if she could give her father a gift.

“Mister Kendall, can I give this to my daddy,” she said.

Holding out her hand, little Lisa Marie had just a thin metal bangle bracelet that she wanted to give him. With tens of thousands of fans waiting to see Elvis, both Kendall and Priscilla were fearful of one trying to take it from his body as a memento.

Kendall ended up agreeing to let Lisa Marie give the gift to be placed with her father…but only under one condition from Priscilla: that it be secretly hidden.

She wanted her father to have it on his wrist, so Kendall took the bracelet and placed it on Elvis’ right arm. Lisa Marie wished to know if it would stay there forever and he confirmed.

The condition from Priscilla was that if the bracelet were to be placed on his body before the viewing, that it be covered with his shirt sleeve and out of view – preventing anyone from robbing the casket of its valuables.

With the bracelet concealed and placed on her father’s body, Lisa Marie and Priscilla then allowed the public to view Elvis one last time. Some estimates say that more than 30,000 people came through the house that day.