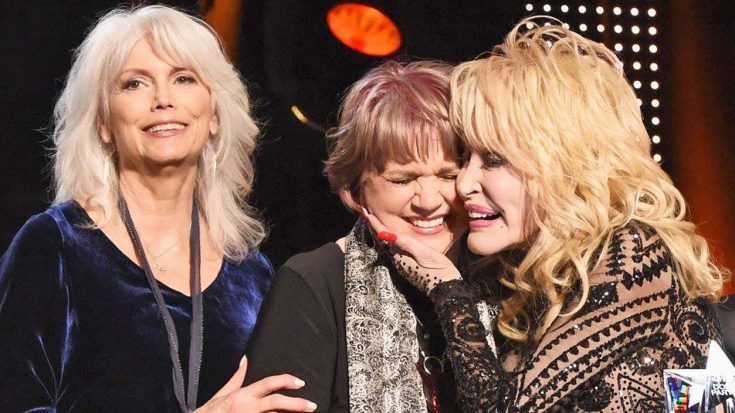 Even after 60 years in the spotlight, the world can’t get enough of Dolly Parton. From sold-out shows to platinum-selling albums, Parton has been paving a path for music for decades. Finally, after all her hard work and dedication to the industry, Parton got her own Grammy’s tribute – with love from some very special guests.

The moment we've been waiting for! @dollyparton accepts our 2019 #MusiCares Person of the Year award. ♥️

In honor of this year’s 61st Annual GRAMMY Awards, Parton was recognized as the MusiCares Person of the Year. The event honors musicians and artists while raising money for a philanthropy foundation. Celebrating the bubbly-blonde who has been nominated for 47 Grammys and won nine – the honor was well overdue! Furthermore, Dolly was the first country music star to be nominated for this title.

Several artists came forward to honor the country legend including Willie Nelson and Little Big Town. Parton’s goddaughter, Miley Cyrus joined pop singer, Shawn Mendes for a riveting “Islands in the Stream” duet. Garth Brooks and Trisha Yearwood brought all the chemistry with their “Old Flames Can’t Hold a Candle to You.” But the real treat of the night came when Parton’s fellow “trio” bandmates, Emmylou Harris and Linda Ronstadt surprised the star on stage to present her award.

Back in the spring of 1987, Parton, Ronstadt, and Harris released their first collaborative studio album together, Trio. The album sold over 4 million copies across the world and won two Grammy Awards. The longtime friends went on to produce a followup album in the late 90s.

While introducing Parton for her award, Harris spoke,

“It’s such a sweet thing for me and Linda to be here tonight celebrating our very dear and great friend.”

Being one of Ronstadt’s first public appearances since her 2012 Parkinson’s diagnosis, it was a special moment as Harris continued.

“Such an extraordinary woman who has touched so many lives with her remarkable talent, but not just with her talent – her grace, her humor. She’s one of the funniest people I know; she cracks me up.”

Dolly couldn’t have been more pleased to be reunited with these two country ladies! Watch her reaction and acceptance speech below.