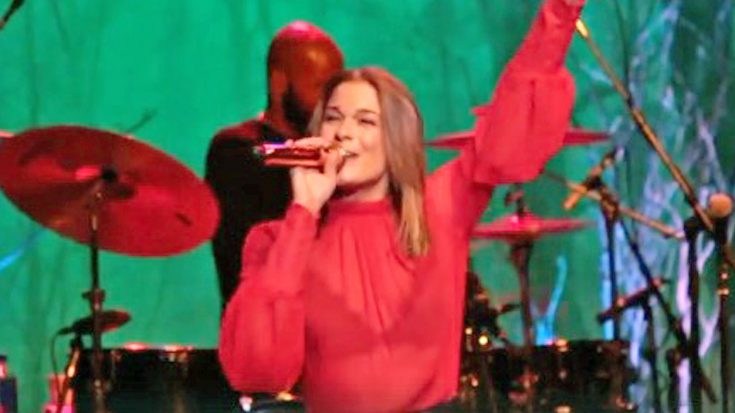 LeAnn Rimes has never been shy about sharing her love for all things related to Christmas. Almost every year, Rimes makes a point to embark on a special Christmas tour, and 2017 was no exception.

Rimes’ Today Is Christmas Tour kicked off on December 2 in Fort Lauderdale, Florida, and wrapped up on December 20 in Aspen, Colorado. But before she took off on tour, Rimes got the chance to enjoy some Christmas fun with her husband Eddie Cibrian when the two of them visited a Christmas tree farm.

On her Instagram, Rimes shared a few photos from their visit to the Christmas tree farm, and it looks like they were having a grand old time there. These pictures prove just how much Rimes thrives during the Christmas season!

Since Rimes loves Christmas so much, she pours an abundance of energy into her Christmas concerts. The energy can be best seen in the clip we have to share with you below, which shows Rimes singing a magnificent medley of songs.

Set to the tune of her worldwide hit “Can’t Fight the Moonlight,” which was the theme for the Coyote Ugly movie, Rimes broke out into a round of classic Christmas songs. She started the whole thing off with the peppy “Jingle Bell Rock,” before dishing out a short snippet of “Here Comes Santa Claus.”

The song Rimes spent the most time on was “I Saw Mommy Kissing Santa Claus,” which she followed up with the heartbreaking “Last Christmas.” She tied up the whole medley with a sample from “Can’t Fight the Moonlight,” which the crowd started cheering for as soon as they heard.

Rimes managed to mix all of those songs into a medley that was just a wee bit over three minutes long. Now that’s impressive!

Of course Rimes’ voice was just as gorgeous as ever, but it was her stage presence that truly made the medley. Her enthusiasm for the music showed in her actions, which made her performance even more of a joy to watch.

You can catch Rimes’ festive Christmas medley in the clip below. Once you finish, let us know which part of the medley was your favorite!