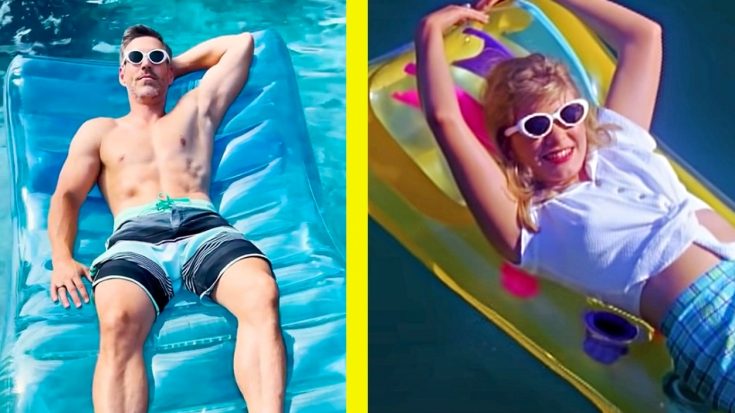 Country singer LeAnn Rimes shared a hilarious video of her husband, Eddie Cibrian, recreating a scene from one of her most iconic music videos to date.

The music video Cibrian decided to recreate was from Rimes’ song “Blue.” The song was the title track to her debut album that she released in 1996 which reached No. 3 on the Billboard 200 chart, and No. 1 on Top Country Albums.

In the Instagram video, Cibrian spots a pair of chunky white glasses, just like the ones Rimes wore in the original music video. He casually picks them up and glances around to make sure no one’s looking as he tries them on. Once the glasses are on his face, he’s suddenly transported to a crystal clear pool on a blue floatie. He’s casually floating in boardshorts with his arm behind his head, in a completely serene moment. In the background, Rimes’ classic tune plays.

When he takes the glasses off, it’s back to the bland real world. He tries them out again and the same thing happens. However, this time he gives the camera a wink and kicks the float into the center of the pool.

Cibrian’s video was in response to one that Rimes did herself, to celebrate the song’s 25th anniversary.

Watch Rimes’ husband in the hilarious video below.