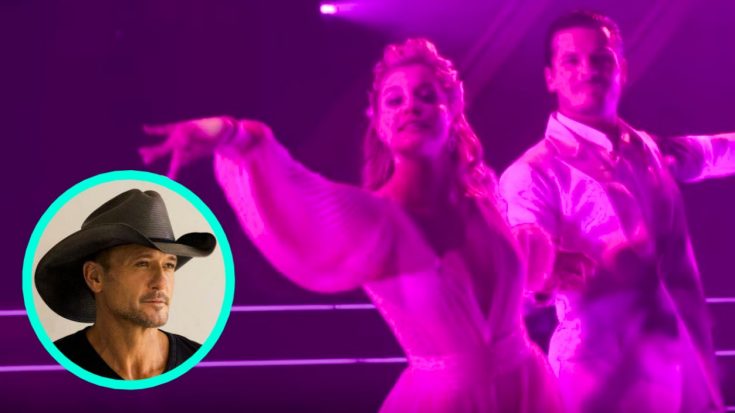 After weeks of hard work, Lauren Alaina took to the Dancing with the Stars stage to perform in the season 28 semifinals. She danced two routines that night, a fiery Paso Doble and an elegant Viennese waltz.

The latter dance was set to one of the most impactful country songs of the past decade…Tim McGraw‘s “Humble and Kind.”

Written by Lori McKenna, “Humble and Kind” was released by McGraw in January 2016. The song went on to win the 2016 CMA Award for Song of the Year and also won the 2017 Grammy Award for Best Country Song.

“Humble and Kind” means a great deal to many people, including Alaina. On DWTS, she mentioned that the song reminds her of her mother, saying, “Honestly, the song sounds like everything my mom’s ever said to me.”

Alaina’s connection to “Humble and Kind” helped her connect to her dance that accompanied it, and it showed. The judges rewarded her for the stunning routine, giving her a score of 27 out of 30.

That score, along with the viewers’ votes and the 27 she earned for her Paso Doble earlier in the night, helped Alaina advance into the finals.

I PINK you’re going to love our dances tonight. I really don’t want to SLEEVE this competition. Please go vote now!! Text “Lauren” to 21523 ten times and go to dwtsvote.abc.go.com and vote ten more times! I really want to make the finale!!!

In addition to being praised by the DWTS judges following her “Humble and Kind” dance, Alaina also received a compliment from McGraw himself.

Taking to Twitter, McGraw expressed how impressed he was with Alaina’s routine, saying she did a “great job.” He then went on to say that she had his vote.

At the end of his tweet, McGraw told his followers how they could also vote for Alaina if they wanted to.

Great job @Lauren_Alaina on your dance tonight to Humble and Kind…got my vote!

It surely meant a lot to Alaina to have McGraw’s support.

Now, you can see why McGraw gave Alaina such a great compliment when you watch her “Humble and Kind” dance below. She has come so far since the first week in the competition, and is more than deserving of her spot in the finals!