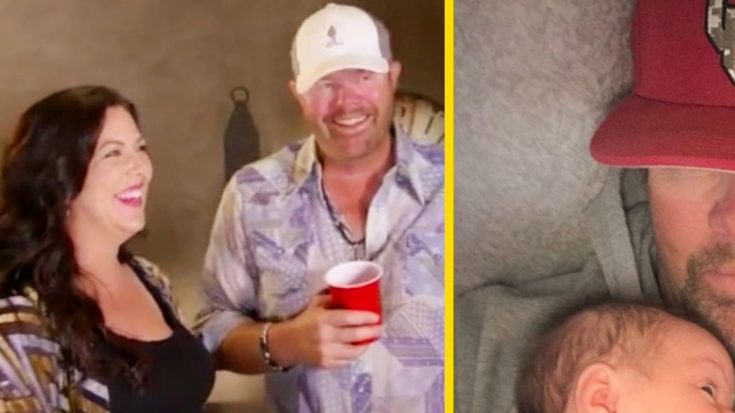 To us, Toby Keith is one of the biggest names in country music. But to his kids and grandkids, he’s “dad” and “grandpa.”

Toby and his wife, Tricia, have three children together. Their eldest, Shelley, is actually Tricia’s daughter from a previous relationship, but Toby eventually adopted her. He and Tricia also have a son, Stelen, and another daughter, Krystal.

Out of his three children, Krystal is the most well-known, as she followed in her father’s footsteps and became a country singer herself. Her most successful solo single is a song titled “Daddy Dance with Me,” which she wrote for Toby and performed for the first time during her wedding to Andrew Sandubrae in 2010.

Five years after their marriage, Krystal and Andrew welcomed their first child, daughter Hensley Jack. Her birth made Toby a new grandpa to three grandkids, as Shelley already had two children.

Krystal has been more than willing to share photos of Hensley as she has grown, and even enlisted her help when it came time to announce she was going to be a big sister. In July 2018, she shared a sweet video of Hensley declaring that her mama had a “baby in her belly.”

That baby, another beautiful little girl, was born on January 29, 2019. Krystal and Andrew named her Kirby Kaye, and the proud mama of two took to her Instagram to share some of the little one’s first photos.

“When you thought you had loved as big as you ever could. And then in a single moment, the size of that love doubles. Welcome to the world Kirby Kaye Sandubrae,” she wrote.

When you thought you had loved as big as you ever could. And then in a single moment, the size of that love doubles. Welcome to the world Kirby Kaye Sandubrae. Our sweet girl joined us on Tuesday weighing 7lbs and 14oz. We are happy and healthy. Hensley Jack is the best big sister and Drew is way out numbered with a house full of girls and wouldn’t change a thing.

Of course, the one photo everyone was waiting to see was baby Kirby’s first photo with her grandpa Toby. It took a month, but Krystal finally shared a sweet snapshot of her baby girl snuggling up to her “PopPop.”

The photo shows baby Kirby dressed in an adorable onesie with an all-over heart print as she rests on Toby’s chest. Krystal couldn’t help but reminisce over the sight, writing that Kirby was “Snuggled into the same spot I snuggled into 33 years ago.”

Isn’t that the most precious thing you’ve seen today?

Toby and Krystal have always shared a close bond. The public was first introduced to Toby’s youngest daughter 15 years ago when she appeared onstage with him at the CMA Awards.

They performed their rendition of the Inez & Charlie Foxx song “Mockingbird,” and left everyone in awe. To this day, many fans still name their duet as one of the best performances in CMA Award history.

Their recorded version of the song ended up reaching the 27th spot on the chart, and helped propel Krystal’s own career into country music. Relive the duet that started it all for her by tuning in below.

We love seeing how much love Toby has for his kids and grandkids…it’s such a sweet thing to witness!