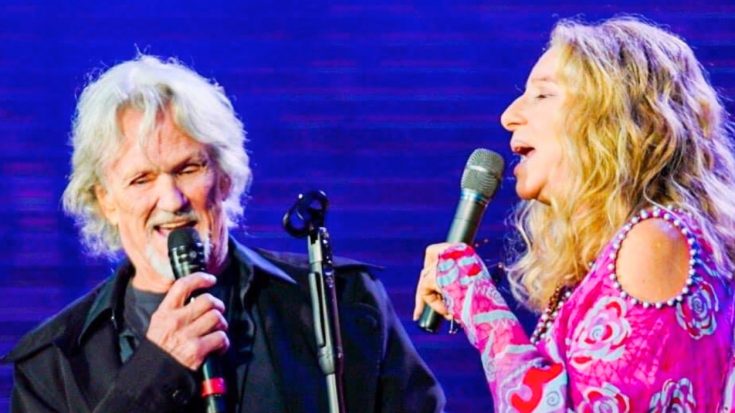 Fans were treated to a huge surprise at the British Summer Time music festival in London’s Hyde Park on July 7, 2019.

Barbra Streisand headlined the festival on Sunday (July 7) and treated festival-goers with a star-studded set, which included performances from Bryan Ferry, The Kingdom Choir, Richard Marx, Jamie Lawson, Lionel Richie, and one special reunion with her A Star Is Born co-star Kris Kristofferson that has everyone talking.

The reunion, though, has been a longtime coming. Back in April, the two posed for a sweet photo together, Streisand tweeting, “It was so wonderful to see my friend Kris who stopped by yesterday. Stay tuned…

It was so wonderful to see my friend Kris who stopped by yesterday. Stay tuned…? pic.twitter.com/2qUrgOikHk

Her sly “stay tuned” comment had fans freaking out.

“I am tuned,” one fan wrote on Twitter, while another said, “Ooooh now I’m really excited!!! I going to see Kris in Aberdeen Scotland before seeing you in Hyde Park ….. the dates are quite close ???? Barbra have you something to tell me? Love you both!”

It seems that that fan knew something we didn’t because the legendary duo performed in Hyde Park over the weekend!

“A while back, I made a movie called ‘A Star Is Born’,” she told the crowd. She then played a clip that was cut out of the movie, which delighted everyone in the crowd and sang “Evergreen.”

Afterwards, she spoke about the first time she ever met her future co-star and he took her breath away. She played a clip that showcased their insane chemistry and shocked the crowd when she said, “Ladies and gentlemen, please welcome one of my favorite leading men. Kris Kristofferson!”

The audience went wild when the country legend joined her on stage.

“Here’s a song we sang together in the movie. I love this one,” she told everyone.

Together, they performed “Lost Inside of You,” a song they sang in the film. It is widely considered the “Shallow” of its time. “Shallow” is the breakout romantic song from the 2018 version of the movie, starring Lady Gaga and Bradley Cooper.

Watch her entire A Star Is Born tribute below, including her captivating duet with Kristofferson in the video below.