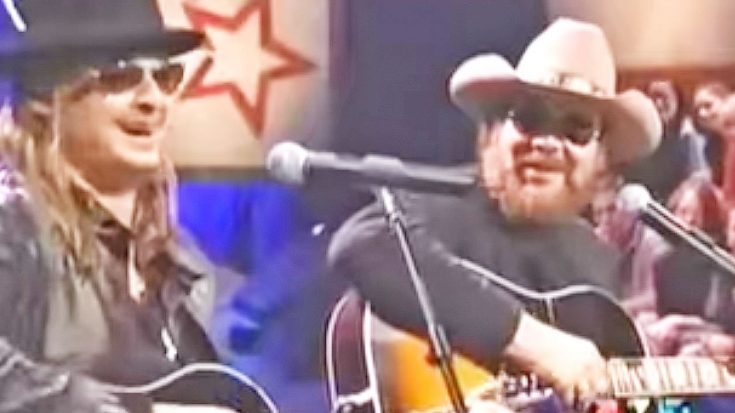 The two musicians are long time friends and collaborators, putting out multiple southern state anthems such as “The F Word” in 2002 and “Redneck Paradise” in 2013. Each artist is a legend it their respective genre and when they come together you know you’re in for something good.

The two harmonize the first few lines of the song before William’s encourages Rock to take on the next few as a solo, to which he protests “Oh man, you’re gonna get me in trouble!” Rock eventually gives in and finishes the verse out with the lyrics “And you know that when I fall, now I can’t help myself at all and I get whiskey bent and hell bound.”

“Whiskey Bent and Hell Bound”was released as the title track off Williams’ 1979 album and peaked at No.2 on Billboard’s Hot Country Songs chart. The song tells the tale of a man who can’t seem to manage being faithful to his “sweet girl at home” after a few shots of whiskey.

Watch Hank William’s Jr. and Kid Rock’s performance of “Whiskey Bent and Hell Bound” in the video below.