KFC Just Replaced Reba McEntire As Colonel Sanders…But With Who? 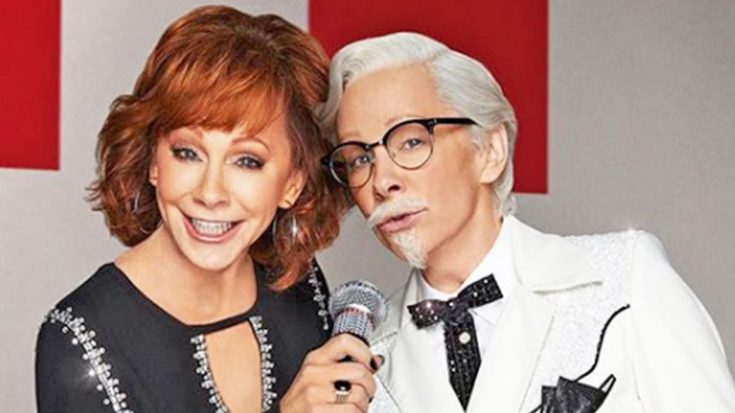 Country legend Reba McEntire made history this year when she became the very first female to portray the iconic Colonel Sanders character in KFC’s commercials. In the past few years the company has hired many different male actors to play Colonel Sanders including Darrell Hammond, Norm McDonald, Jim Gaffigan, George Hamilton, Rob Riggle, and more.

McEntire first teased her new, historic gig with a photo on Facebook where she was sitting at a makeup table with a photo of the original Colonel Sanders on her right, and glasses, a white wig and mustache/goatee, and bowtie to her left, quite similar to the photo below.

To my friend Reba, Because we are definitely two different people, it’s an honor to wish you a happy birthday. Your pal, Col. Sanders P.S. Mine is in September. Please send chicken.

Hours later, her first commercial as Colonel Sanders debuted to rave reviews! Since then, more began airing on television and it’s all anyone could talk about!

In an interview with AdAge, McEntire spilled the beans on the process of becoming the iconic Colonel. One of the reasons she signed on to portray a white-haired man was the shock value.

“I think shocking everybody,” she said when asked what drew her to the gig. “They didn’t think I would do something like that. That’s always when it’s the most fun to me, when it’s a shocker, like, ‘Oh my gosh, I couldn’t believe she did that!’ I like surprising my fans.”

McEntire filmed a total of four commercials for KFC, helping promote their Smoky Mountain BBQ chicken, among other food items. But, as we all know, all good things must come to an end and KFC has officially replaced McEntire. Who could possibly play the Colonel now?

Well, they just debuted their latest commercials and the new Colonel Sanders is being portrayed by Seinfeld star Jason Alexander. Because he rose to fame on a sitcom in the 90s, his campaign is centered around a cheesy sitcom. Check out his first commercial below.

We don’t know about you, but Reba will always be our favorite Colonel! To reminisce, take a look at the rest of her hilarious commercials.