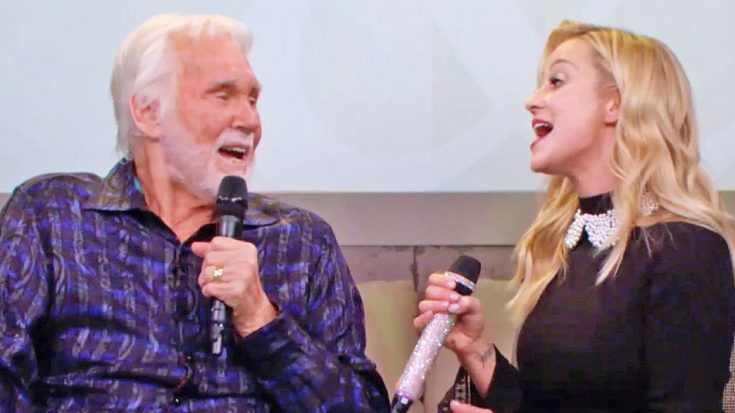 Rogers and Parton performed the song together a number of times over the years.

The two collaborated for a final live performance of the song during Rogers’ retirement celebration and farewell concert at the Bridgestone Arena in Nashville in 2017. Rogers passed away in March 2020.

While they tried to make it work whenever possible, Rogers and Parton couldn’t always be in the same place to sing “Islands in the Stream” when they felt like it.

As a result, they oftentimes had to perform the song solo, or they enlisted the help of another singer.

Finding Someone To Step In For Dolly

The latter is exactly what Rogers did when he appeared on the talk show Pickler & Ben. Since the now-defunct show was co-hosted by country singer Kellie Pickler, Rogers didn’t have to look far to find a duet partner for “Islands in the Stream.”

Seated on two chairs near the front of the set, Rogers and Pickler smiled at the studio audience as they prepared to move into the song.

It was clear that Pickler felt a bit of pressure, as she commented, “I’m no Dolly! I’m gonna try!“

If Pickler was nervous, it certainly didn’t show once she started singing with Rogers. Her sugary-sweet voice was a nice addition to the song, and she sang all of Parton’s parts with joy and enthusiasm.

Overall, you can tell that Rogers and Pickler had a fun time singing together, and that’s what makes their duet so cute to watch! Check it out in the clip below.

We think Parton would be proud of how Pickler carried out her part, don’t y’all?