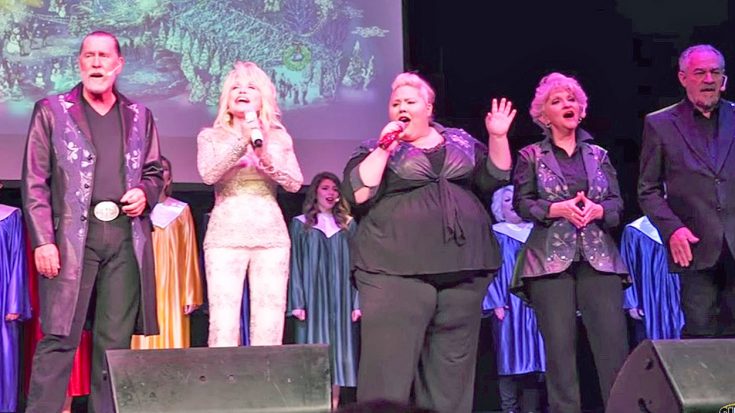 To celebrate the 2016 Christmas season, Dolly Parton released the sequel to her beloved Coat of Many Colors film. Called Christmas of Many Colors: Circle of Love, the movie told the story of the Parton children’s quest to help their father buy a wedding band for their mama.

The main song featured in the film was appropriately titled “Circle of Love.” While the movie itself referred to the “circle of love” as the wedding band the children were working to buy, the song “Circle of Love” refers to the gift of Jesus’ birth.

As you would guess, Parton loves the Christmas season with all her heart. Every year, her Dollywood theme park gets all decked out for the holiday season. As Christmas approaches, Dolly also reveals the big plans that the park has in store for the coming year.

On Friday (November 3) Dollywood was closed for a special media event. During the event, Dolly shared Dollywood’s plans for 2018, which she referred to as a “Season of Showstoppers.” A number of talented artists will be invited to perform at the park throughout the year, with a total of 30 Grammy Awards between all of them.

Dolly had another surprise in store for the crowd once she finished sharing all of her Dollywood news. She led up to her big surprise by referencing the Christmas they found out her mama was expecting her younger brother Randy, and how that was such a special Christmas for all of them.

On that note, Randy strolled out from behind the curtain to join his big sister out in front of the crowd. After that, Dolly shared that she would be welcoming some of her other family members to come join her for a Christmas-themed performance. One by one, she introduced her nieces Heidi and Jada, and her cousins Debbie Jo and Dwight.

Joined by a full choir, the six family members treated the audience to a delightful performance of “Circle of Love.” Dolly and her niece Heidi took turns singing lead, while all of the other family members sang along in sweet harmony.

Tune in to the video below to enjoy Dolly’s dazzling performance of “Circle of Love” with her family. Moments like these are so touching to witness!