Kenny Chesney Brings Injured Fan On Stage in 2019, She Sings “She Thinks My Tractor’s Sexy” 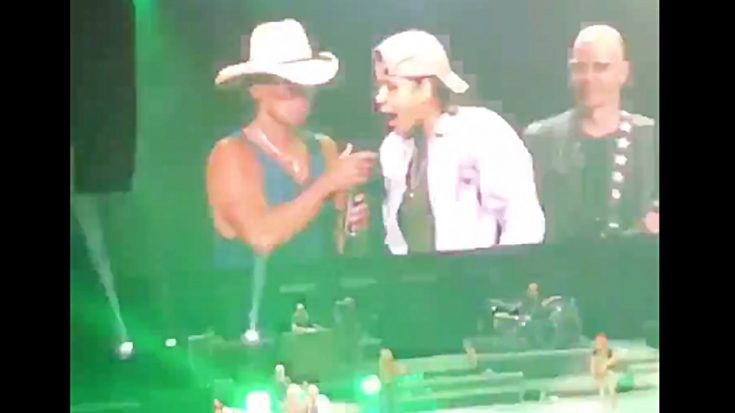 Kenny Chesney fans got the surprise of a lifetime when one concertgoer took the stage for a jaw-dropping and unexpected performance of “She Thinks My Tractor’s Sexy.” Even better? She did it while standing with crutches…

Mizzou Women’s Basketball star, Akira Levy was just in her first year at the university when she tore her ACL and meniscus. Being unable to use her right knee, she knew the season was over for her. While the talented athlete cheered on her teammates from court side, she finally got her own time to shine when country star Kenny Chesney invited her on stage at his Missouri show.

At the time, Chesney was on his Songs For The Saints Tour across America. He made the rounds in sold-out stadiums and arenas and loved inviting his most special fans on stage during each show. Luckily for Levy, he had touched down in her city at the Mizzou Arena on March 2, 2019.

While singing his hyped up “She Thinks My Tractor’s Sexy,” Chesney invited Levy on stage to join him. As he handed the injured guard the microphone, she literally blew everyone away. Chesney starts by singing with his arm around Levy, right before letting her steal the show.

As soon as she got her hands on the microphone, the crowd went wild. Her powerhouse vocals resonated throughout the venue as fans screamed and cheered her on. Holding herself up with her crutches, she belted out the lyrics to his country jam. Now that is one performance no one will ever forget!

While she impressed the large crowd at Chesney’s concert, it wouldn’t be the first time Levy has showcased her beautiful voice. The basketball star sang the National Anthem at the Missouri Tigers’ last home game of their season. Directly following, she jumped into her teammate’s arms hyping them up.

It’s safe to say Akira Levy is a star both on the court and on the stage! We see big things happening in her future.