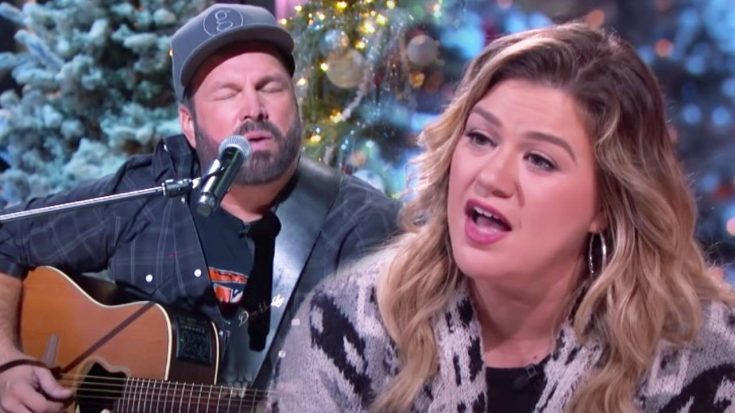 December 14, 2020, served as a full hour of Garth Brooks on The Kelly Clarkson Show.

For the entire show, Brooks and Clarkson sat over six feet apart on bar stools and talked about his brand-new album Fun, which he released on November 20, 2020.

During the hour-long hang, Brooks played some of his legendary hits, like “The Dance,” and one new one, which happens to be a duet with his wife Trisha Yearwood. The duet actually came about thanks to a livestream the two did at the beginning of quarantine in 2020. A fan requested they sing “Shallow” from the hit movie A Star Is Born and they happily obliged.

The response of that spontaneous duet was so overwhelming that they decided to record their own version, which Brooks included on Fun and released to country radio on November 2nd.

During the show, Clarkson complimented Brooks on his and Yearwood’s rendition of “Shallow,” and brooks asked her if she’d want to sing it with him. Of course, she said yes!

Brooks started the musical intro on his guitar, which he said had a really country and James Taylor feel to it. He started the first verse and waited for Clarkson to sing the second. They joined together for the chorus and we got chills!

After the duet was over, Brooks made sure to look at the camera and said, “Miss Yearwood…I didn’t enjoy that,” joking that he had just musically cheated on his wife.

“I’m sorry, Trisha, but I enjoyed every second of it!” Clarkson said while laughing.

We wouldn’t be mad if Clarkson and Brooks recorded their own version of this duet! Watch it below.