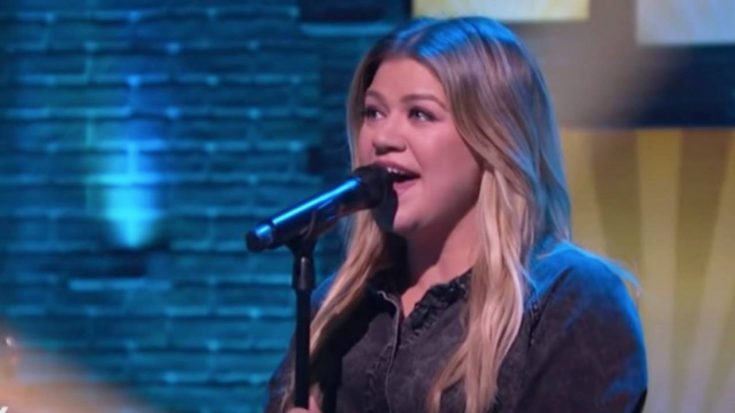 As you may know, Kelly Clarkson starts every episode of her talk show with a cover song. The segment is cleverly titled “Kellyoke.”

She has covered every genre from R&B, to pop, to soul, and of course, country. During her October 14th episode, she kicked off her show with a country song that had her band break out the fiddle!

Singing Shania Twain’s “No One Needs To Know,” Clarkson wore a black denim dress to look the part.

Twain released “No One Needs To Know” as the sixth single off of her 1995 album Woman In Me. The song reached number one on the charts and helped Woman In Me become Twain’s biggest-selling album at the time of its release. She included “No One Needs To Know” on her 2004 Greatest Hits album and it helped set the tone for the contemporary country music craze that was happening in the 90s.

From the comments on the YouTube video, it seems that country may be a fan-favorite genre that Clarkson covers on her show. And this performance has some convinced she should release a full country album!

“We need a country album asap!! Kelly can sing anything!!!” one fan said, while another wrote, “One of my favorite covers Kelly has done. She brought her country twang on this one!”

Do you agree with them? Watch her cover below!