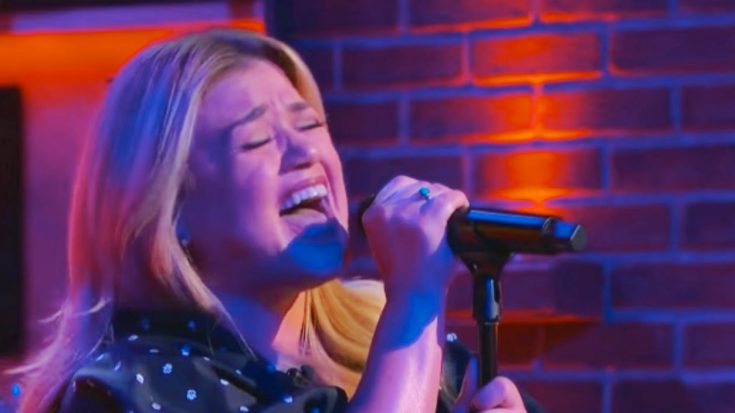 One of her standout country covers was actually a collaboration. It featured her fellow Voice coaches Blake Shelton, Gwen Stefani, and John Legend, as well as host Carson Daly.

But that “Neon Moon” cover wasn’t the only time Clarkson visited a 90s country hit for “Kellyoke.”

For one episode, Clarkson opted to deliver her own take on Travis Tritt‘s feisty single from 1991, “Here’s a Quarter (Call Someone Who Cares).” The song peaked at the second spot on the country charts in both the U.S. and Canada.

Today, “Here’s a Quarter” remains one of Tritt’s most well-known works.

Since “Here’s a Quarter” is full of attitude, Clarkson didn’t hold anything back in her cover. She delivered a sassy, soulful rendition of the song that the crowd seemed to thoroughly enjoy.

On top of being full of personality, Clarkson’s rendition of “Here’s a Quarter” perfectly showcased her vocal talents. The song gave her the opportunity to roar into some strong, powerful notes, creating a dynamic performance.

We could talk about Clarkson’s “Kellyoke” performance of “Here’s a Quarter” all day, but it’s better if you just witness it yourself. You can do so by tuning in to the video below.

Clarkson may be known as a pop star, be she’s proving to be the queen of country covers! Which 90s country song would you like to hear her sing next?