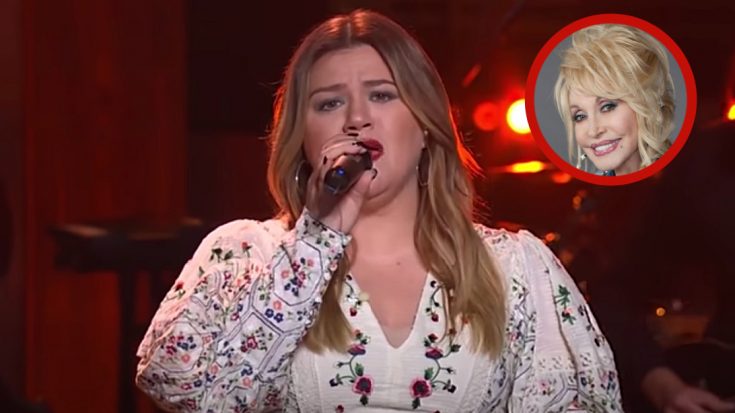 Just one week after she paid tribute to Dolly Parton with a beautiful rendition of “I Will Always Love You,” Kelly Clarkson has covered another Dolly tune for her Kellyoke talk show segment.

Kelly’s latest Kellyoke segment for The Kelly Clarkson Show had her singing “Jolene,” Dolly Parton’s 1973 hit that has become one of her most iconic and most covered songs. According to Dolly, she wrote the song about a red-headed bank teller who was flirting with her husband, Carl Dean.

Although “Jolene” has been covered numerous time from artists such as Olivia Newton-John and Pentatonix, Kelly Clarkson‘s latest rendition brought loads of passion and heart. For the most part Clarkson stuck to the original tune and feel of the song, but brought her own spin to the ending.

This is the third Dolly Parton cover Kelly Clarkson has delivered in recent weeks. In addition to her performance of “I Will Always Love You” at the 57th Academy of Country Music Awards, Clarkson also recently recorded a new rendition of “9 to 5” along with Dolly Parton that is set to be released in conjunction with the upcoming documentary about the 1980 film of the same name.

“The first iteration, Dolly’s original version, was very upbeat. There was a lot of hope I would say in the song,” Camille Hardman, co-director and producer of the documentary said. “And this version is just a little bit melancholic.”

Co-producer/director Gary Lane added, “Dolly actually called it ‘9 to 5: The Slow Version’. It’s definitely slowed down and more haunting. Kelly — you can’t believe how she changes it, too. It’s really mind blowing.”

Lane recalled to Variety the reaction Dolly’s creative director Steve Summers had after he heard the new rendition the first time. “I’ve probably heard that song a thousand times, and I really never heard the words to the song till I heard them right there,” Summers told Lane.

Look for Kelly Clarkson and Dolly Parton’s new take on “9 to 5” to be released in May. In the meantime, enjoy Clarkson’s Kellyoke version of “Jolene” in the video below.