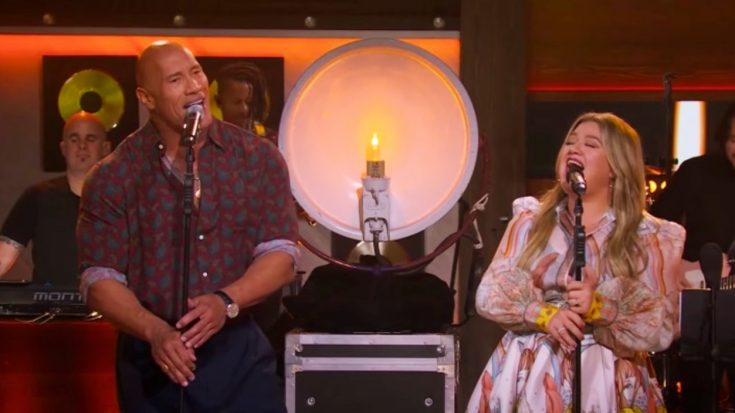 Dwayne “The Rock” Johnson is known as a wrestler and actor. But did you know he can sing too?

Those who have young kids have surely watched the movie Moana a time or two (or 20,000). Johnson voices the character Maui in the film, and sings the song “You’re Welcome.”

We’ve heard Johnson sing a number of other times in the past. He’s a big fan of country music, particularly classic country. He’s covered songs such as Elvis‘ “Jailhouse Rock” and Loretta Lynn‘s “You Ain’t Woman Enough.”

Johnson performed the latter song in the 2005 comedy movie Be Cool.

More recently, Johnson performed another one of Lynn’s classic songs while he was a guest on The Kelly Clarkson Show. He joined Clarkson to sing “Don’t Come Home A-Drinkin'” as a duet.

Johnson previously told Clarkson he’d love to sing with her one day. It was first suggested they sing Kenny Rogers and Dolly Parton‘s “Islands in the Stream.” But they ended up singing “Don’t Come Home A-Drinkin'” instead.

The duo’s performance also served as a tribute, since Lynn passed away on October 4 at the age of 90.

Fans loved watching Johnson and Clarkson sing “Don’t Come Home A-Drinkin’.” Some of the comments on the official YouTube video were:

“What a world we live in. Never in a million years would I think I’d ever see THE ROCK duet with Kelly Clarkson !!! Yes !!!!”

“His voice really actually fits that song. Who would have guessed Dwayne is a countryboy??”

“Smiling through the whole thing. So unexpected but so wholesome This makes my heart so happy. RIP Loretta.”

“Wow not only is his tone beautiful and suited for country music, but he blends beautifully with Kelly’s tone. I am impressed. That was amazing!”

Now you can watch Johnson and Clarkson’s classic country duet by checking out the video below. We’d love to hear these two sing together again sometime!