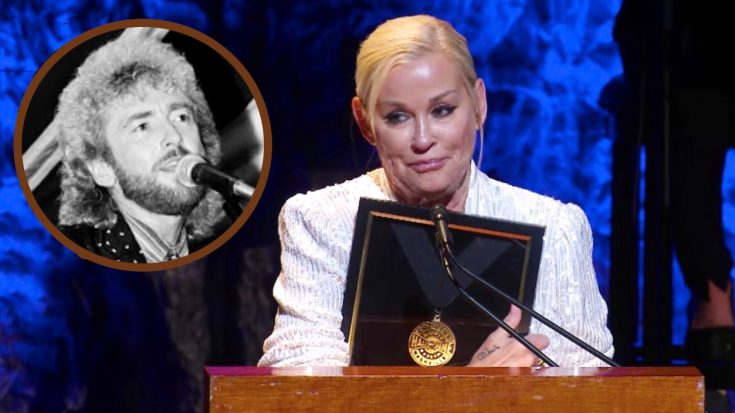 At last, Keith Whitley was inducted into the Country Music Hall of Fame on Sunday (October 16). He was inducted alongside Jerry Lee Lewis and music executive Joe Galante.

Whitley, who passed away in 1989, was honored with musical performances by Garth Brooks, Mickey Guyton, and Ricky Skaggs.

Brooks, who has been an outspoken advocate for getting Whitley into the CMHOF, spoke briefly during the ceremony. According to Taste of Country, Brooks said:

“For all country music fans, this night is long overdue.”

Whitley’s widow, Lorrie Morgan, was present to accept his CMHOF medallion. His children and his brother were also in attendance.

Morgan gave an emotional speech during the ceremony. As Taste of Country reports, she shared that Whitley passed away just weeks before he was going to be asked to become a member of the Grand Ole Opry. He had no clue that the Opry had such plans.

Despite his success, Morgan said Whitley struggled with feelings of self-doubt. Therefore, he never could have imagined that he’d one day be inducted into the CMHOF:

“He would have never expected this in his life,” Morgan said.

Morgan later reflected on the induction ceremony in a post on social media. She said:

“How amazing to have @garthbrooks make the presentation! His words were incredible. I didn’t know what to say. There’s so much I left out and so many people to thank. But I can tell you this. Like all of you, I fell in love with Keith’s voice first, and that is something I did share with everyone last night.”

You can watch portions of Morgan’s speech and pieces of the performances honoring Whitley by tuning in to the CMHOF’s video below. The video also covers how fellow inductees Galante and Lewis were honored during the ceremony.

Congratulations to Whitley’s family on this long-awaited honor.