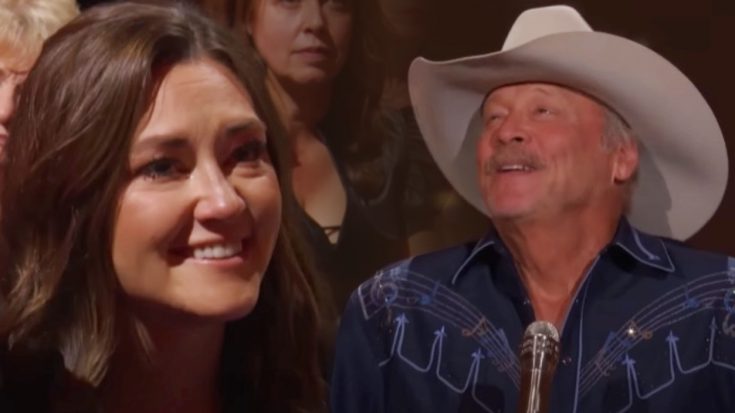 Alan Jackson was honored as CMT’s “Artist of a Lifetime” during the network’s annual Artists of the Year ceremony. He attended the event with his wife, Denise, their eldest daughter Mattie, Mattie’s fiancé Connor, and their youngest daughter Dani.

“Best way to celebrate @officialalanjackson is all dolled up with these peeps! What a beautiful evening and reminder the impact his remarkable career continues to have on so many as this year’s CMT Artist of a Lifetime.”

Alan delivered an emotional acceptance speech during the ceremony. Before he said anything else, he used his speech to honor Loretta Lynn, who passed away on October 4:

“First thing I want to say is that there will never be another Loretta Lynn…she was always so nice to me. We had a good friendship and I just really appreciated her. And we’re gonna miss ya sugar.”

While Alan talked about Loretta, the camera cut to show Mattie, who was crying in the crowd. Several of the other audience members could be seen with tears in their eyes at that moment.

Alan went on to reflect on the many music videos he’s made over the years. “I always believed that the videos were important to the music,” he said.

He told a story about how he was vacationing in the Bahamas two years ago and heard a man playing his music. Some of the songs he was playing were ones Alan himself hadn’t heard in a long time. When Alan met the man, he shared that he was listening to Alan’s music and watching his videos on CMT.

Alan ended his speech by saying, “God bless CMT and all you people out there, thank you so much.”

You can watch Alan’s speech in the video below. Skip to the 6:51 mark in the video to jump straight to his speech.

Alan also celebrated by performing his hit song “Chattahoochee.” Everyone in the audience remained on their feet during the song. Many of the attendees were caught singing along…including Alan’s family.

Head below to watch Alan’s performance. He is definitely deserving of his new “Artist of a Lifetime” title!