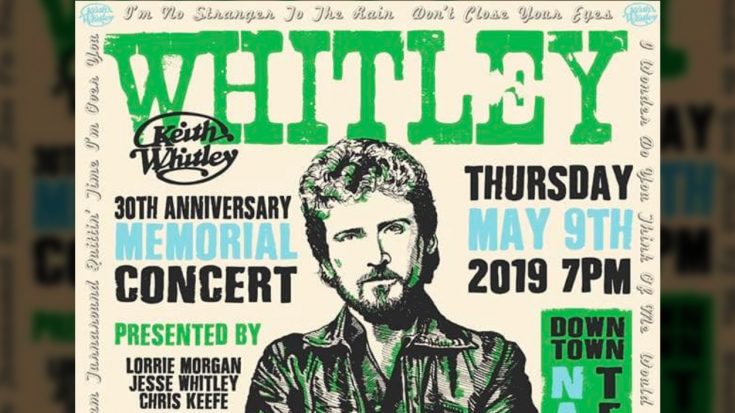 The man who brought so many wonderful hits to life passed away at the young age of 33, leaving behind an almost two-year-old son and wife.

His notable hits include “I’m No Stranger To The Rain,” “Miami, My Amy,” “When You Say Nothing At All,” and “Don’t Close Your Eyes,” just to name a few. He had three posthumous number one singles, and a few other posthumous singles that made it to the Top 15.

His career reached legendary status after just a few years in the business and four albums, one of which was released six years after his death.

In honor of the 30th year since his passing, country singer Lorrie Morgan – Keith’s widow – and their son Jesse Keith Whitley will host a tribute concert held at the Country Music Hall of Fame and Museum’s CMA Theater.

Lorrie announced the concert on social media this morning after her son made the big reveal on WSM Radio 650 AM. Jesse Keith revealed that every year they do a memorial motorcycle ride for his father from Keith’s hometown of Sandy Hook, Kentucky to Nashville. They’ve been doing that for over 20 years.

But this year, Jesse Keith, Lorrie, and the Country Music Hall of Fame wanted to do something big, since it’s the 30th anniversary of his passing.

Tickets will go on sale Friday, March 29 at 10 AM central time. You can purchase tickets and see a full lineup here!