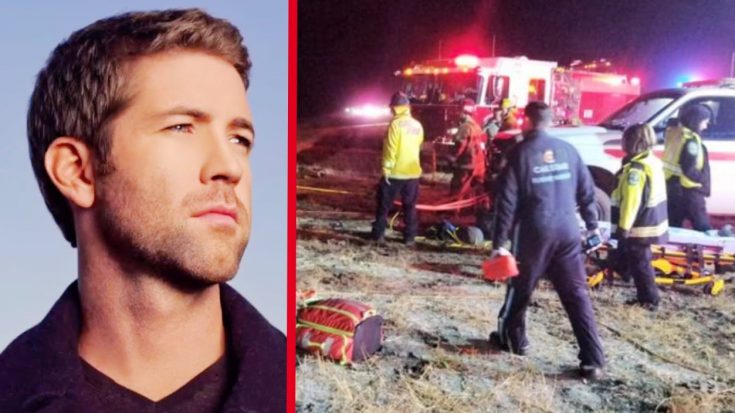 At 11:45 PM on Wednesday (September 18), a tour bus carrying members of Josh Turner‘s crew was involved in a terrible accident near Mcmillan Canyon in California. The bus drove off the road and went down a 50-foot embankment.

Josh and his musicians were on a separate bus at the time.

Seven crew members were injured in the accident, with the CAL FIRE San Luis Obispo Fire Department telling KGET.com that two people had major injuries, while the other five had moderate injuries.

The fire department was also sad to report that one person was killed in the crash.

The identity of that person was not known until later on Thursday (September 19). A family friend confirmed with the San Luis Obispo Tribune that the deceased member of the crew was Josh’s sound engineer, David Turner.

Although David was of no relation to Josh, he worked for the “Long Black Train” singer for 14 years. He had also previously worked with artists such as Patty Loveless, Tammy Wynette, and Eddie Rabbitt.

While Josh has not released a public statement about the crash or David’s passing, he has responded by canceling his remaining shows for September.

At the time of the crash, Josh and his crew were traveling to Yakima, Washington, to play at the Central Washington State Fair on Friday (September 20). The Yakima Herald reports that show has now been canceled, as confirmed by fair general manager and President Greg Stewart.

Josh was then scheduled to perform at the Kern County Fair in Bakersfield, California on Monday (September 23). Fair organizers confirmed with KGET.com that performance has been canceled as well.

“Just Another Day in Paradise” singer Phil Vassar will perform in Josh’s place at both fairs.

Musician Josh Turner has canceled his concert set for Monday, Sept. 23 at the Kern County Fair and will be replaced by Phil Vassar.https://t.co/NtdrbO7T3o

Josh also canceled his September 28th performance at the Harrah’s Ak-Chin Casino in Arizona, as reported by inMaricopa.com. The outlet published an announcement about the cancellation, which read in part:

“Following the devastating news that one of Josh Turner’s tour buses was involved in a deadly accident in California, we have been told that all remaining shows in September will be rescheduled for a later date.  Josh’s show scheduled for Sept. 28 at Harrah’s Ak-Chin has been cancelled.”

All September show dates have also been erased from the “tour” section of Josh’s website. His next scheduled show is for October 4 in Fort Bliss, Texas.

Our thoughts and prayers go out to Josh, his band and crew, the injured crew members, and David Turner’s family during this sad time.