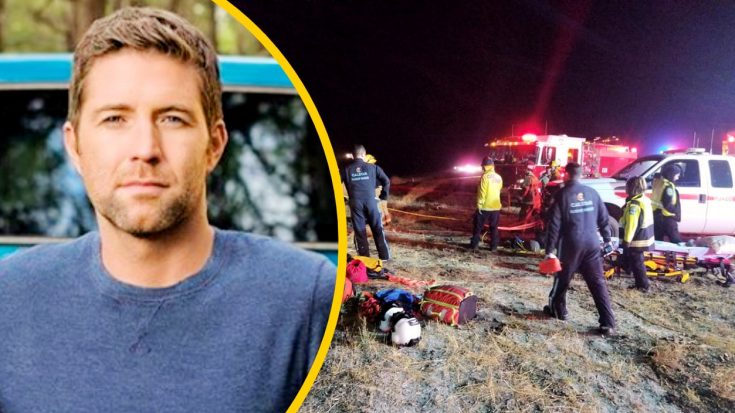 A bus carrying members of Josh Turner‘s crew was traveling from California to Washington state when it was involved in a fatal crash at 11:45 PM on Wednesday (September 18).

The bus drove off of the road and went down a 50-foot embankment. David Turner, who served as Josh’s sound engineer, was killed in the crash.

Josh and David were of no relation, but David had been a member of Josh’s crew for 14 years.

Seven of Josh’s crew members were also injured in the accident. Immediately following the crash, the CAL FIRE San Luis Obispo Fire Department told KGET.com that two people had major injuries, while the other five had moderate injuries.

Josh and his musicians were traveling on a separate bus. As of press time, the “Long Black Train” singer has not released an official statement on the accident.

But Josh did respond by canceling the remainder of his concerts for September…a total of three shows. His next concert is currently scheduled to take place on October 4 in Fort Bliss, Texas.

Musician Josh Turner has canceled his concert set for Monday, Sept. 23 at the Kern County Fair and will be replaced by Phil Vassar.https://t.co/NtdrbO7T3o

That gives the injured members of Josh’s crew nearly two weeks to recover. The names of those injured crew members were finally released by the San Luis Obispo Tribune.

Those names are as follows:

Bus driver Bradley Dratnol, age 39, was also named as one of the injured crew members.

According to the San Luis Obispo Tribune, Bradley Dratnol was taken to the Fresno Community Regional Medical Center and was treated for injuries of unknown severity. All of the other crew members except for Jeb Downing were taken to various facilities to be treated for major to moderate injuries.

Jeb Downing’s injuries were minor, and he did not need treatment.

Our prayers go out to all of the injured crew members. We wish them quick and complete recoveries.

We’ll also be praying for the family, friends, and loved ones of David Turner during this time of loss. May he rest in peace.