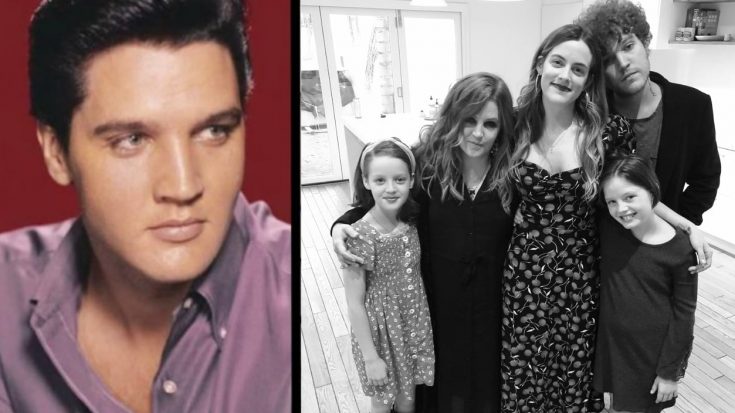 All four of Lisa Marie Presley‘s kids were under one roof to celebrate a birthday, so it was the perfect time for the group to take a rare family photo together.

Lisa Marie is a mother of four. Her eldest, daughter Riley Keough, was born on May 29, 1989. She is known as a model and actress, having starred in projects such as The Girlfriend Experience, Mad Max: Fury Road, and Magic Mike.

Riley’s mom and three siblings joined her for a 30th birthday celebration in 2019, and surprised her with a touching gift. Lisa Marie had recorded the song “Tiny Dancer” by Elton John, which she said is “Riley and mines song.”

But as an added surprise, Lisa Marie had Riley’s then-ten-year-old sisters, twins Harper and Finley, record the chorus with her.

Riley’s emotional response said it all.

Also present for the celebration was Riley’s brother Benjamin, Lisa Marie’s only son and therefore Elvis‘ only grandson.

Benjamin was seen in public a lot less than his sisters. But those who have seen a photo of him before know that he was his grandpa’s spitting image.

So those who hadn’t seen Benjamin were stunned to see just how much he resembles Elvis in a photo Lisa Marie shared from Riley’s 2019 birthday gather.

Taking to Twitter, Lisa Marie posted a photo of herself with all four of her children, which was a rare sight. She captioned the picture, “Mama Lion with cubs.”

It ended up being the last picture Lisa Marie ever posted of her with her son.

While some people simply gushed over the cute snapshot, many more zeroed in on Benjamin, noting how much he looked like his famous grandpa. As you can see, the resemblance is pretty uncanny.

Just in case you needed a few more photos of Benjamin for reference, take a look through these…

After looking through those pictures (especially that last one with Riley), it’s hard to deny that Benjamin was his grandfather’s spitting image!

During an interview with US Weekly, Priscilla Presley even said that she saw the resemblance between her grandson and ex-husband, saying, “I see a little of Elvis in Benjamin.”

You can see even more of Benjamin and his siblings by tuning in to the below video from Elvis’ 80th birthday celebration a few years back. It was always a rare sight to see all of Elvis’ grandkids in one place, so this video is a true treasure, especially now that Benjamin is no longer with us.