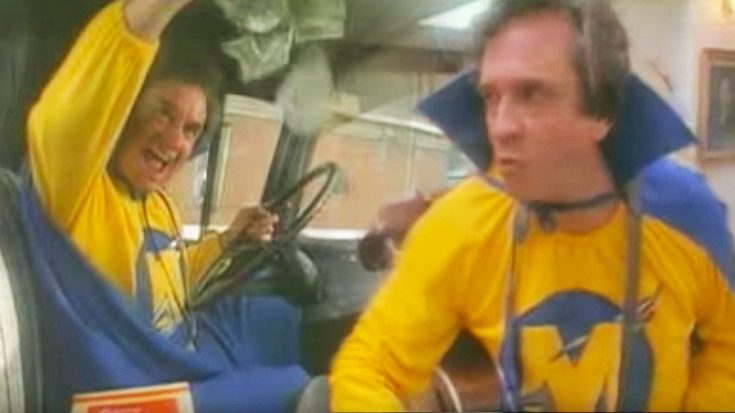 It’s hard to imagine it now, but there was once a point in history when music videos didn’t exist. Now, almost every time an artist releases a new single they also release a music video to accompany it. At times, they’ll even release videos for songs that are never shipped to radio.

Music videos certainly weren’t a thing for the majority of Johnny Cash‘s career. Because of this, “The Man in Black” doesn’t have many music videos to his name. But even if he made hundreds of music videos, there’s one that would always stick out because of its bizarre nature, and it has an equally strange story behind it.

Back in 1984, Cash was frustrated with his record label Columbia, which was owned by CBS at the time. He felt that the label was neglecting him, and made his displeasure known.

According to Cash, he decided to retaliate against the label by releasing a self-parody song, which was titled “Chicken in Black.” The song, which was written for Cash by Gary Gentry, tells a strange story about Cash switching brains with a bank robber named the Manhattan Flash. But once he does, Cash completely loses his own personality, and mistakenly believes that he is actually the Manhattan Flash. Because of this, he ends up asking people to hand over their money wherever he goes.

In the meantime, Cash’s brain is transferred into the head of a chicken, who ends up knowing all of his songs. Because of this, the chicken becomes a signing sensation and gets signed to a ten-year recording contract.

Sounds strange, doesn’t it? Cash agreed, writing in his second autobiography that the song was “intentionally atrocious.” He made the claim that he wanted to do something outlandish just to make his label deal with it, saying, “I was burlesquing myself and forcing CBS to go along with it.”

However, Cash biographer Robert Hilburn tells a different story. In his 2013 biography Johnny Cash: The Life, he challenges Cash’s claim that he recorded “Chicken in Black” as a sort of protest against Columbia and CBS. Hilburn asserts that Cash was more than willing to lend his voice to the song, considering the fact he had recorded comical pieces in the past, such as “A Boy Named Sue” and “One Piece at a Time.”

Cash included “Chicken in Black” as part of his live shows, and even filmed a music video for it (which we’ll get to in a bit). But as Hilburn claims, his attitude toward the song changed when his good friend and Highwaymen bandmate Waylon Jennings told him he looked “like a buffoon” in the music video. After that, Cash requested that Columbia withdraw the video and the single. He later described the whole incident as “a fiasco.”

There’s no denying the fact that Cash’s music video for “Chicken in Black” is one of the strangest videos we’ve ever seen. But while Cash may have hated it, we openly admit that we got a good laugh out of the whole thing.

The video follows the plot of the song to a tee, and follows Cash’s transformation from “The Man in Black” to a guitar-wielding bank robber who can’t sing a note. One particularly comical moment comes when Roy Acuff invites Cash to play the Opry, and he strolls on the stage with pure panic in his eyes. When he tries to sing, the only thing that comes out of his mouth is a demand for all of the audience members to hand over their valuables.

Of course, we can’t forget about the song’s namesake chicken, who ends up with Cash’s brain and becomes a famous country singer. He even had a tiny guitar and everything!

Now that you know all about the oddities attached to the creation of this song and video, check it out in the clip below. If there was an award for weirdest country music video of all time, this one would be a prime contender!