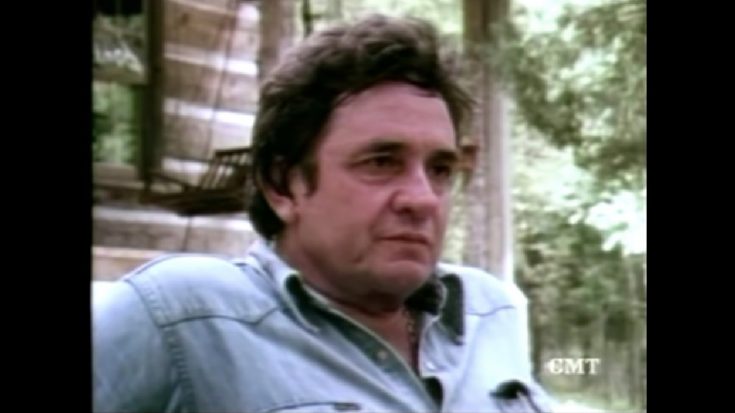 Johnny Cash was arguably one of the greatest and most recognizable voices in country music history. But, his career was riddled with as much turmoil as he had success.

The Man in Black made his Grand Ole Opry in 1956 shortly before landing his first No. 1 single with “I Walk the Line.” The night of his Opry debut, Cash not only met June Carter, the woman that would become his wife of more than 30 years, but he also started a tumultuous relationship with one of country music’s most sacred institutions.

Jim Denny, the Opry’s manager at the time, had doubts about Cash performing on the sacred stage. “He looked at my black clothes and long hair and sideburns and said, ‘What makes you think you belong on the Grand Ole Opry?’ So I said, ‘Well, I’ve got a record in the Top 10’ … I said, ‘I think they’d like to hear me’,” Cash recalled.

Cash took the stage that night for his Opry debut and sang “I Walk the Line,” “Get Rhythm” and “So Doggone Lonesome.” He played the Opry often until 1965 when he was banned from the venue after a drunken outburst.

In a 1982 interview with 60 Minutes, Cash addressed his drug and alcohol addictions and the incident that got him kicked out of the Grand Ole Opry.

“It’s a vicious cycle. The amphetamines to get me up and barbiturates to bring me down. In concert, when I started drinking beer along with the amphetamines, I drank about 4 to 5 a night, but got up to 12 to 15 or a case a night,” Cash recalled, saying that he wanted to get a little high before going on stage. “Sometimes I misjudged how high I was, and I’d get on stage and was a wreck.

When asked about his Grand Ole Opry banishment as a result of his behavior on stage, Cash replied, “I don’t know how bad they wanted me in the first place, but the night I broke all the lights on the stage with the microphone stand, they said they couldn’t use me anymore. So I left and used that as an excuse to really get wild and wound up in the hospital with my third time I broke my nose.”

Cash credits June Carter for leading him toward recovery after he reached rock bottom. That moment came when Cash was near Chattanooga, Tennessee, and he realized that he had burned bridges with everyone around him.

“I decided I could never face anybody again. I had gone back on my word with everybody so many times, and hurt them and lied to them that I thought I would just crawl off in a cave and die,” Cash recalled. But, instead he returned home to find his mother and June waiting for him. According to Cash, that was the day he swore off pills.

Eventually, Cash was invited to return to the Grand Ole Opry where he was welcomed with open arms up until his death in 2003.

Hear Johnny Cash discuss his Opry ban in the video interview from 1982 below.