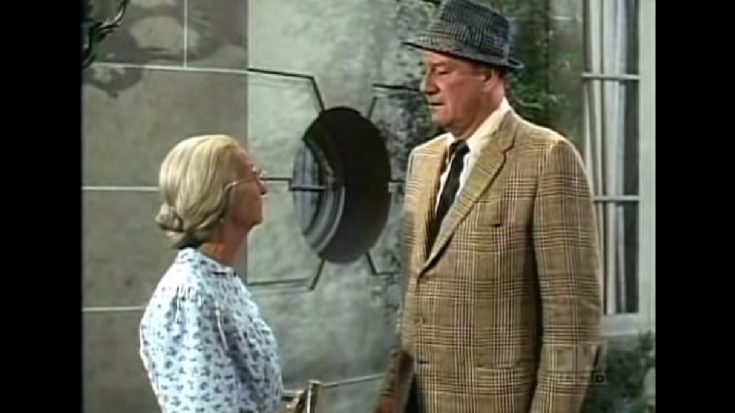 John Wayne is arguably one of the most beloved and iconic actors in film history. At the height of his illustrious career, Wayne traded the big screen for the small screen to make a guest appearance on The Beverly Hillbillies.

The year was 1967, five years after The Beverly Hillbillies premiered, and the show was one of the most watched on television thanks to its unique family ensemble of backwoods Clampetts that included Jed, a widower, who lived with his daughter Ellie May, mother-in-law, Granny, and Jed’s cousin’s son, Jethro.

It seems an unlikely pairing that the cast of The Beverly Hillbillies would team up with rough-and-tumble western star John Wayne, but that’s exactly what happened during the show’s fifth season when the “True Grit” star made a guest appearance alongside the Clampett’s for a brief scene.

In the episode titled “The Indians Are Coming,” the Clampetts get in a dispute with a local indian tribe. Granny prays that John Wayne would show up to protect them from a possible attack. But, when John Wayne arrives at the estate after an apparent attack, Granny is less than impressed.

The scene takes place at the end of the episode and Granny is seen rocking in her chair in front of the family mansion when John Wayne strides up and clears his throat.

“I bet your pardon. I understand you were looking for me. I’m John Wayne,” the actor says to Granny. She replied, “Where was ya’ when I needed ya’, John.”

While the Duke’s part was small, it marked one of several surprise television appearances he made during his career. But, for his quick appearance on The Beverly Hillbillies, Wayne only asked for one thing in return….a bottle of bourbon.

See John Wayne’s scene in The Beverly Hillbillies in the clip below.