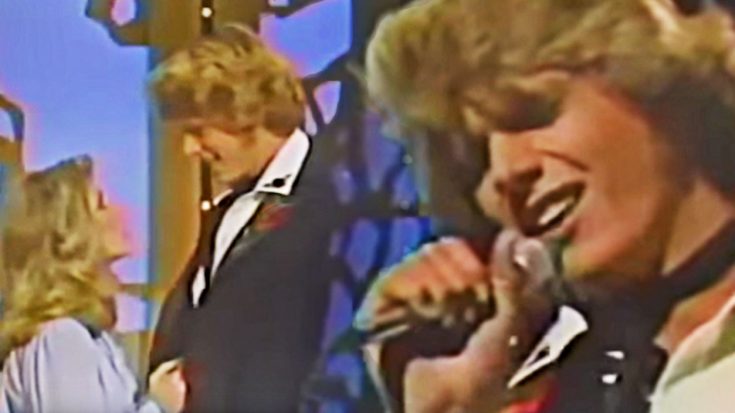 Famous for his character on Dukes of Hazzard, this hunky blond also made a name for himself by crooning country ballads alongside the best of them!

John Schneider, who started his career as an actor on Dukes of Hazzard, also championed a fully-fledged country music career and soared to new heights with impressive feats – such as earning the top-charting Elvis cover of all time!

Throughout the early 80s, Schneider gained great popularity performing a variety of country covers and releasing his own original music. He also appeared on highly-rated variety shows like The Midnight Special and The Mandrell Sisters Show.

In a clip from one of his appearances with the Mandrell Sisters, Schneider is introduced by Irlene Mandrell, who says that she wasn’t going to let either of her sisters have the great pleasure of introducing him.

“Barbara and Louise wanted to introduce him, but they’re all tied up right now,” she said coyly. “I know that for a fact because I tied them up myself! Nobody was gonna deprive me of this pleasure!”

Before she can even finish describing him as a sexy hunk in her introduction, Schneider shows up in front of her and she’s completely hypnotized – frozen in sheer delight of meeting this hunk she’d been waiting for.

.@John_Schneider is a man of many talents, and he'll showcase just a few of them tonight on the Saturday Night #Opry! pic.twitter.com/0xL7M1s4yx

Without missing a beat, Schneider then rests his cowboy hat on her hand and moves her to the side before jumping into a chilling rendition of Kenny Rogers‘ unforgettable hit, “Lady.”

Clearly, he made a big impression with this performance as fans gushed endlessly about his song saying how much they loved it and reeling from sheer delight.

Watch the full video below and tell us what you think!