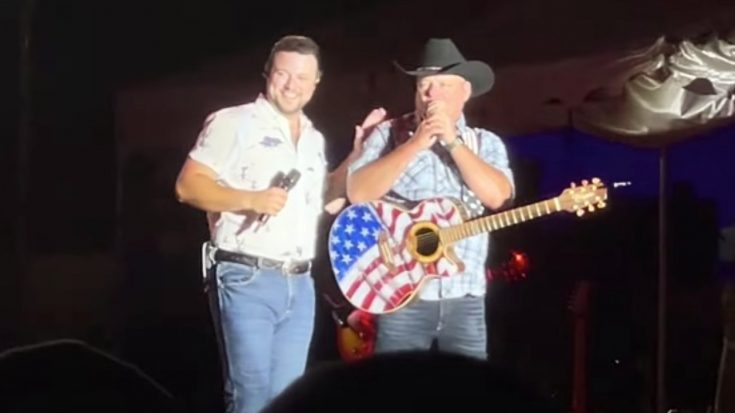 John Michael Montgomery released “Sold (The Grundy County Auction Incident)” in 1995 as the second single off of his self-titled album. The song was a smash hit…it ended up reaching the #1 spot on the Hot Country Songs chart and was named the #1 country song of 1995.

Today, “Sold” is considered to be one of the most iconic country songs to come out of the 1990s.

Walker is a country singer himself, having released his debut EP Simple Town in 2017. His newest EP is a six-track collection titled Rust.

John loves sharing the stage with Walker whenever he gets the chance. That chance came when John was performing at the Kentucky State Fair in August 2022.

The elder Montgomery surprised the audience by revealing that his son was there to sing “Sold” with him that night:

“Well, I think I got one more song I think y’all need to hear,” John said. “But, uh, tonight’s gonna be special because I’m gonna bring my son out here and he’s gonna help me sing it.”

Walker joined his dad on stage while the crowd cheered. They then moved into their energetic performance of “Sold,” and the crowd enjoyed every second of it.

John made it clear that he also got a kick out of singing with Walker. He reflected on their performance in a post on social media, saying, “Thank you @kystatefair for a great night. Nothing better then being home and sharing the stage with @walkermontgomery.”

Jump to the video below to watch John and Walker sing “Sold” together at the Kentucky State Fair. They make a great team!