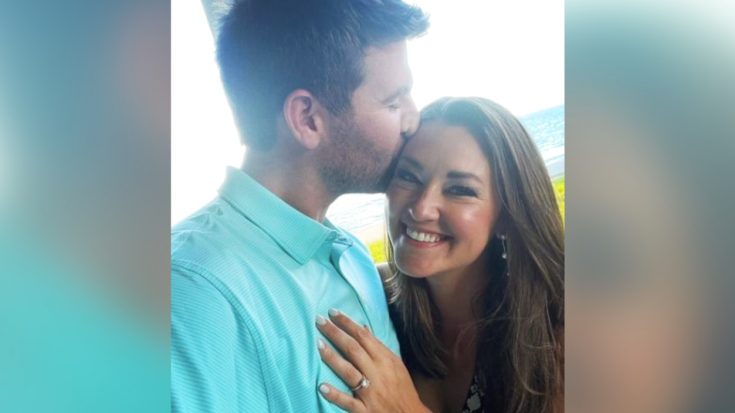 Mattie shared the news over the weekend that she and her boyfriend, Connor, are now engaged. Connor popped the question while the couple was vacationing at the beach to celebrate his 30th birthday.

“Well… came down for a beach week to celebrate my sweet man’s 30th birthday. Didn’t know we’d end up celebrating choosing the rest of our lives together!!” Mattie wrote in a celebratory post on social media including photos of her showcasing her new engagement ring.

“Feeling overwhelmingly thankful, excited, and thrilled for this kind-of-surprise but so-fervently-prayed for ENGAGEMENT…I love your playful spirit and your kind heart and your infectious-ness for life, Connor Smith. I cannot wait to be your wife and build a family with you! You are the biggest blessing in the dang cutest package. Love you baby.”

Mattie first introduced Connor to her followers in April, but they went on their first date six months prior to that. She explained how he was the one who allowed her to fall in love again following the tragic death of her husband, Ben Selecman, in 2018. She and Ben had been married for less than a year at the time of his death.

Mattie opened up about her loss in her 2021 book, Lemons on Friday. In the book, Mattie shared how her faith helped her during her most difficult moments, and how she found hope for her future.

By the time Mattie introduced Connor to her followers in April 2022, three and a half years had passed since Ben died:

“I have believed, prayed, and claimed for 3 and a half years now that God would give me the chance to love someone with my whole heart again,” she said. “Other dear widow friends assured me that my heart could heal and expand to love two people equally, though differently. And I hoped so desperately that would really be true. [Connor] is more of an answer to prayer (mine and countless others!) than I sometimes think he even realizes.”

Mattie ended the introductory post by writing, “I cannot believe how good our God is to redeem broken hearts the way he does.“

After everything she’s been through, Mattie’s followers were thrilled to hear that she and Connor are engaged. Mattie filmed a video to thank everyone for all of the sweet messages they sent after seeing the happy news:

“Hey y’all, I just wanted to come on and say thank you to everyone here who was so kind and sent congratulations and messages on Connor and I’s engagement last week,” she said. “It has truly been an incredible whirlwind, and I just feel overwhelmed with love from everyone…“

Mattie then took the time to encourage her followers to consider making a donation to Modern Widow Club’s annual Widows Empowerment Event. Mattie included the donation link in her Instagram bio, and you can also find it here.

Watch Mattie’s video below to hear her talk more about her engagement and the Modern Widows Club.

Congratulations to Mattie and Connor! We’re so happy for them.