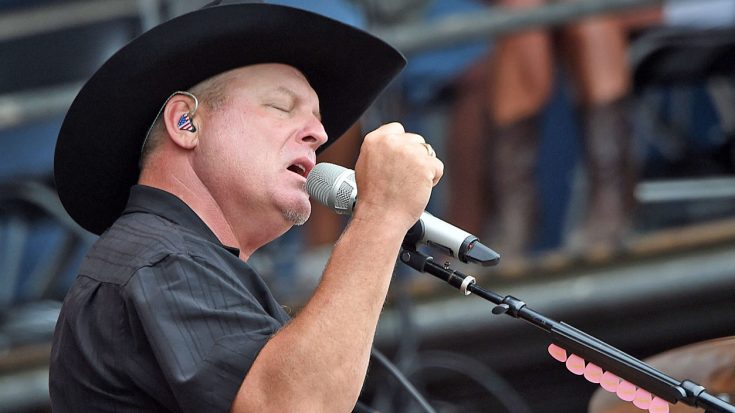 One Of Country Music’s Most Romantic Songs

Throughout his career, John Michael Montgomery has watched 30 of his singles make their way on to the Billboard charts, with seven claiming the number one spot. Out of Montgomery’s seven number one hits, one of the most memorable is his 1993 single “I Swear.”

The romantic ballad was co-written by country music songwriters Gary Baker and Frank J. Myers and was released as the lead single off Montgomery’s second album Kickin’ It Up.

The song became Montgomery’s second number one, with his first being his 1992 single “I Love the Way You Love Me.”

Part of the reason why Montgomery’s song was such a success is probably because of its romantic nature and heartfelt message. Through the lyrics, the narrator promises his love that he will always be with her, saying “‘Cause I’ll stand beside you through the years/You’ll only cry those happy tears.”

The song’s chorus repeats some common parts of wedding vows, with the narrator singing, “For better or worse/Till death do us part/I’ll love you with every beat of my heart/I swear.“ By making this proclamation, the narrator further proves his dedication to the special someone in his life.

The Song’s Success Keeps On

A few months after Montgomery’s release of “I Swear,” R&B/pop group All-4-One recorded their own version and also experienced great chart success. The song hit number one on the Billboard Hot 100 and topped the charts in countries around the world, including Austria, Denmark, and New Zealand.

In the years since the song’s release, it has also been translated into other languages, with Mexican country band Caballo Dorado recording a Spanish version in 1998.

As much as we like the other versions of “I Swear,” Montgomery’s original is still our favorite. It is also a favorite of Joe Nichols, who asked Montgomery to sing the song during a performance in 2008.

Montgomery delivered a stripped down, acoustic version of his hit song, provoking a loud round of cheers and applause from the audience when he finished. You can watch his performance in the video below.

Every time we listen to Montgomery sing this song, it makes our hearts melt!