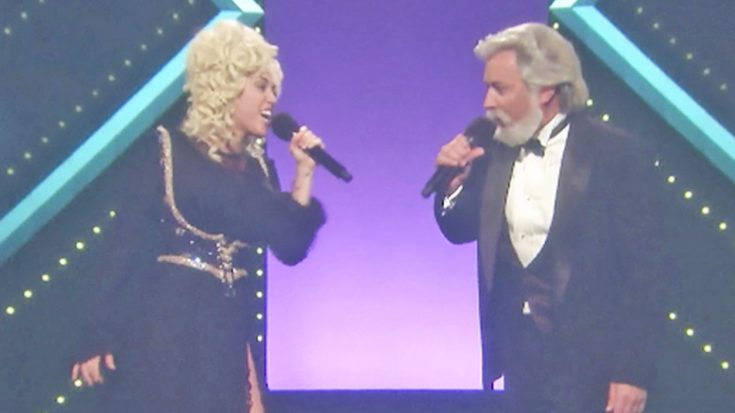 For an entire week, Miley Cyrus appeared on every episode of The Tonight Show starring Jimmy Fallon to promote her album Younger Now in September 2017.

A year ago today, @MileyCyrus released her sixth studio album, ‘Younger Now.’ The album saw Cyrus return to her country-pop roots and debuted at #5 in the US with 45,000 units. It spawned the Platinum-certified single, “Malibu.” pic.twitter.com/HIN7LuK6FQ

In each episode, she took part in games, musical performances, and interviews. On the October 4th episode, she and Fallon sang a duet that will have you doing a double take.

Fallon first walked out on stage in a tuxedo, gray wig, and fake gray beard looking eerily similar to The Gambler himself. Not long after Fallon’s entrance, Cyrus joined him, looking bustier than normal, and wearing a gorgeous black dress with a sky high blonde wig.

Not only did Cyrus and Fallon fit the part musically and with their outfits, but the set was also quite similar to one that Parton and Rogers performed on back in the 1970s.

Rogers saw their performance, and absolutely approved of it, saying, “Jimmy Fallon and Miley Cyrus make a great duet…perhaps we’ll let them go on the road in place of us! I thoroughly enjoyed it.”

Jimmy Fallon and Miley Cyrus make a great duet…perhaps we'll let them go on the road in place of us! I thoroughly enjoyed it.The Tonight Show Starring Jimmy Fallon

Did you enjoy their duet as much as we did? Let us know in the comments. Watch it below.