Jamey Johnson Sings ‘Give It Away,’ The #1 Song He Wrote For George Strait, At 2013 Farm Aid 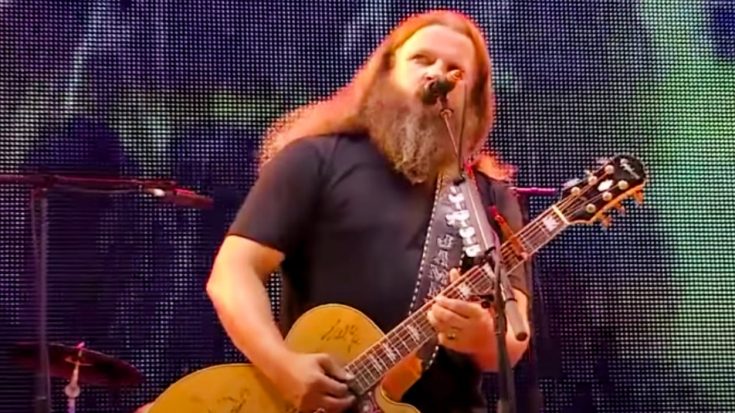 Handing Off A Song To A Legend

As country music fans, we naturally focus the most on the artist singing a particular song. Because of this, we often don’t realize who the songwriters are, unless of course, the songwriter is the artist.

Some of country music’s biggest stars got their start as songwriters for other artists. Even after achieving their own fame as singers, these songwriters will continue to craft pieces for others to record.

One country singer who is also an accomplished songwriter is Jamey Johnson.

You’ve probably heard more of his songs than you ever realized, including one of George Strait‘s biggest hits.

That hit is “Give It Away,” which Strait released in July 2006 as the lead single off of his album It Just Comes Natural. Johnson co-wrote the song with country icon Bill Anderson and songwriter Buddy Cannon.

Their songwriting expertise and Strait’s vocal delivery sent the song to the top of the Hot Country Songs chart, breaking a record in the process.

By topping the Hot Country Songs chart, “Give It Away” became Strait’s 41st number one hit. That established Strait as the country artist with the most number ones on that chart, breaking Conway Twitty‘s previously-established record.

Today, “Give It Away” remains one of the most successful songs that Johnson has ever written. So that’s why it made perfect sense for him to perform it for Anderson’s 50th Celebration, which was set up to celebrate his 50 years in country music.

It’s always interesting to hear a songwriter perform a song of theirs that was later recorded by another artist. Such is certainly true when it comes to Johnson’s performance of “Give It Away.” As you listen to him sing, you’ll wonder why he never thought to record the song himself!

Head down below to tune in to the video of Johnson singing the smash hit that he wrote for Strait. This is exactly why Johnson is one of the most well-respected artists in country music right now!