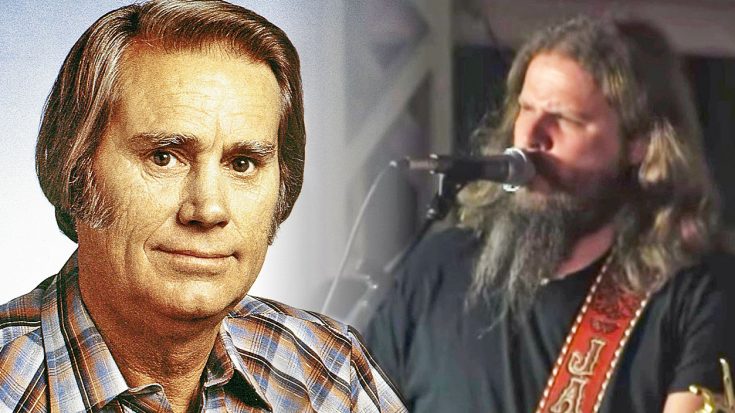 George’s Legacy Lives On In Song

Over the course of his career, George Jones managed to transport 150 of his singles to the country charts. Many of those 150 singles were number one hits, including the 1981 release “Still Doin’ Time.”

“Still Doin’ Time” was written by songwriters John Moffatt and Michael P. Heeney. The woeful song is told from the perspective of a man who was caught cheating and is now all alone since his true love left him.

A year has passed since then, but the man remarks that he’s “still doin’ time” for his wrongs by drinking his sorrow away and “living in h— with a bar for a cell.”

The song was released as the lead single off of Jones’ album Still the Same Ole Me. It went on to become Jones’ eighth number one hit as a solo artist in the U.S. and also claimed the second spot on the country chart in Canada.

It remained at number one for only a week, but it spent an impressive total of ten weeks on the chart overall.

Jamey Continues To Keep It Country

Since “Still Doin’ Time” was such a hit, it remains one of Jones’ most well-known songs. While no other artists have recorded their own renditions of the song, several have performed it live to honor Jones.

One such artist was Jamey Johnson, who delivered a cover that stands out from all others.

Johnson was performing a show for the troops stationed at Camp Arifjan in Kuwait in 2011 when he decided to entertain them with Jones’ “Still Doin’ Time.” Joined by two guitar players, Johnson opted to deliver an all-acoustic version of the song.

The Atmosphere Was Amazing

This arrangement gave it an even greater sense of vulnerability, and allowed Johnson the full opportunity to showcase just how powerful his voice can be.

We feel like you could have heard a pin drop in the audience as they listened to Johnson sing. With the exception of a few hoots and hollers, everyone watching seemed to be completely captivated by Johnson’s performance.

Once you watch Johnson sing “Still Doin’ Time’ in the video below, you’ll understand why he produced such a response from the crowd. There’s no denying Johnson’s talent after watching this. We’re sure it’s a performance that Jones would have given his proud endorsement.