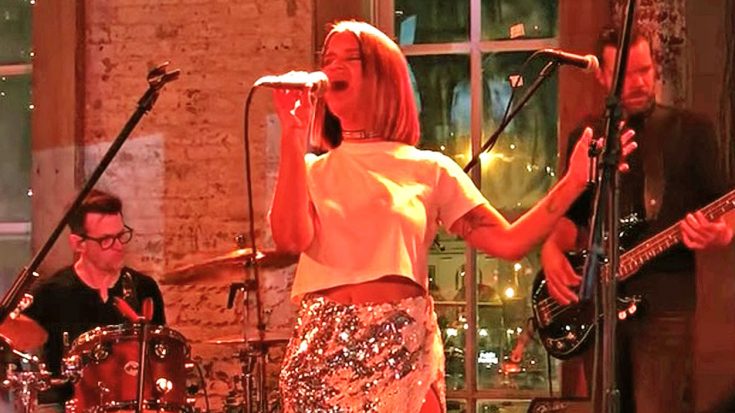 When Deana Carter made her debut in country music, she made sure her name was forever etched into genre’s history. In 1995, she released her first record, Did I Shave My Legs for This? and tested two singles in the UK.

After those test singles, Carter took a leap of faith in 1996 by releasing another one, only that time she decided to try it out in the United States. That single was “Strawberry Wine,” and if you know anything about country music, then you know that song hit it big.

Due its popularity, “Strawberry Wine” is a song that left a lasting impression on anyone who heard it. Many of today’s hottest artists grew up listening to the song, and inevitably, grew up singing it as well.

One of those artists was surely Maren Morris. Known as one of the brightest stars in Nashville at the moment, Morris recently scored the first number one solo single of her career with “I Could Use a Love Song.” Not long after learning this exciting news, Morris took to one of the city’s newest venues to share some music with a crowd of country fans.

That venue was Dierks Bentley‘s Whiskey Row, a bar and grill located on Broadway in Nashville. Morris was one of many star artists on the lineup for the grand opening, and she took time out of her set to sing Carter’s “Strawberry Wine.”

Since the song is so well-known, you can bet that the crowd got excited once they heard Morris’ bands play its familiar first notes. They proceeded to sing along with Morris throughout the song, proving just how much enjoyment they were getting out of the performance.

When singing “Strawberry Wine,” it’s important for an artist to bring out the vulnerable feelings that rest within the song. That’s exactly what Morris did through her rendition, as she approached the lyrics with a tender delivery. Her performance was both intoxicating and irresistible.

Now, you can catch her rendition of the song by tuning in to the clip below. We think she did an excellent job, don’t y’all?