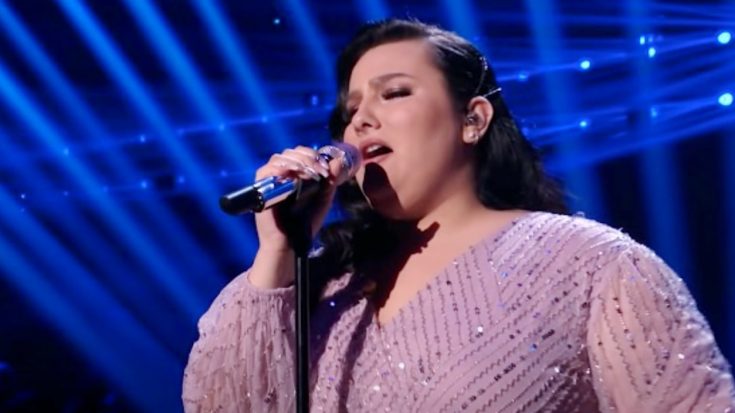 We were first introduced to 18-year-old Nicolina on American Idol when she auditioned with “She Used to Be Mine.” All three judges gave her a standing ovation, and Katy Perry had goosebumps.

The judges gave Nicolina a golden ticket to Hollywood following her audition.

Nicolina powered through the next few weeks of the competition. Before becoming a member of the Top 14, she sang the song she originally auditioned with.

It was incredible to hear Nicolina revisit “She Used To Be Mine” at this stage in her Idol journey.

Nicolina sang again during Sunday night’s (April 24) show. She was vying for a spot in the Top 11, so there was a lot of weight on this performance.

The young singer had the honor of wrapping up the show as the last contestant to sing. She performed a cover of Leonard Cohen‘s timeless song, “Hallelujah.”

Nicolina dedicated her performance to her grandmother.

After Nicolina finished singing, Katy let her know how “beautiful” her performance was. “It was like watching an angel sing this beautiful song,” she said. “It was really, really beautiful.”

Viewers agreed with Katy. After the votes were tallied, it was revealed that Nicolina advanced into the Top 11.

After the show, Nicolina took to social media to reflect on her “emotional night.” She also thanked her fans for voting for her.

Head below to watch Nicolina’s stunning cover of “Hallelujah.” We can’t wait to watch her next performance!