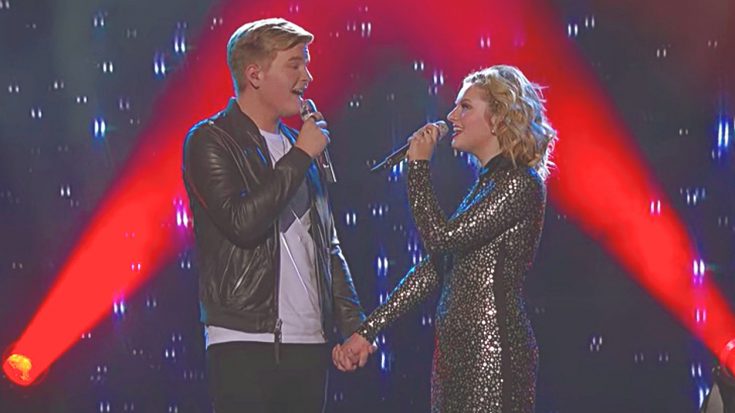 The Season 16 finale of American Idol was quite thrilling, and for a reason other than what you’d expect. Shortly before the winner was crowned, it was revealed that the top two contestants, Maddie Poppe and Caleb Lee Hutchinson, were (and still are) dating!

Originally, the couple had intended to announce their relationship off-air. As Poppe explained, Hutchinson had a feeling she was going to win the show, so he thought he would go on Instagram and write that his girlfriend just won as his way of revealing their relationship.

While their plan didn’t pan out, Hutchinson still took to Instagram to gush when Poppe was indeed crowned the champion of the season.

MY GIRLFRIEND WON AMERICAN IDOL!!! No one deserved it more than you babe. I am honored to know you and even more honored to call you mine. Don’t forget about me. I love you ❤️

Their Duets Are Magical

During the Idol finale, viewers got the chance to watch Hutchinson and Poppe sing together when they performed “Somewhere Over the Rainbow” and “What a Wonderful World.” But that wasn’t the last time that the couple sang a duet.

Since Idol wrapped up, Hutchinson and Poppe have been traveling all over the country for various performances and other engagements. They performed for Radio Disney Country, and the whole thing was streamed online by the American Idol Instagram page.

For their performance, Hutchinson and Poppe visited one of the most well-known country love songs of all time, Keith Whitley‘s “When You Say Nothing At All.” The song was a number one hit for Whitley in 1988, and Alison Krauss later took it to the third spot on the chart in 1995.

As if the song wasn’t romantic enough, it becomes even more so when you hear Hutchinson and Poppe sing it together. Knowing about their real-life romance adds a whole new layer to the song, as you know that they truly mean what they’re singing to each other.

It’s that personal connection that makes Hutchinson and Poppe’s performance of “When You Say Nothing At All” so sweet and tender. Beyond that, their voices simply sound heavenly together.